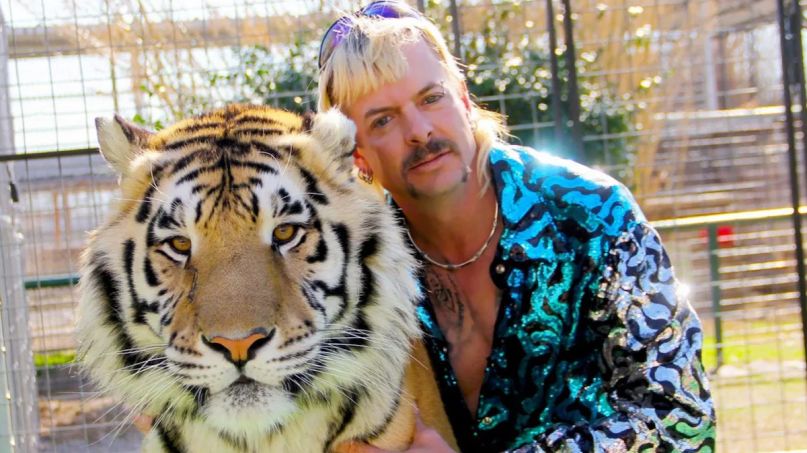 Hard times for Tiger King’s Joe Exotic. In a letter obtained by TMZ, dated June 1st, and addressed to “supporters, fans, and loved ones,” the imprisoned Netflix celebrity paints a pretty bleak portrait for himself. In fact, he predicts, “I’ll be dead in two to three months.”

Before that, though, Exotic thanks everyone for their support, erroneously claiming the pandemic is over, and pleading for that sweet presidential pardon, writing: “I ask President Trump to keep his word and look into making this wrong a right and grant me a miracle.”

It’s perhaps at this point that Exotic realizes everyone’s moved on from Tiger King mania because things take a dark turn. “My soul is dead,” he writes, “I struggle every day to hold on to what little hope I can find.” Reason being, he has no outside communication, he’s apparently being sent photos of his husband Dillon Passage living it up elsewhere, and he reportedly hasn’t received medical help since January. He goes on to argue, “It’s like I’ve been sent to death row.”

From there, Exotic maintains his innocence, argues he’s been taken advantage of, and brings race into the picture. Towards the end of the three-page letter, he even equates his situation to George Floyd, writing, “Anyone doing films, signing contracts with any of these people, should be ashamed of yourselves. This was my life, it was my parents lives, and I’m not even dead yet. It’s like George Floyd. His message got lost in the riots. My message got abandon [sic] for money and fame.”

Oh, that’s not all. Exotic tops off the letter by referencing Michael Jackson’s Dangerous single “Will You Be There” — which, in an ironic twist, was also used on the Free Willy soundtrack (you know, a film about freeing animals) — and calls out to Cardi B and Kim Kardashian for help. “Please ladies. I’ve done nothing wrong,” he insists.

It’s a letter as meandering and insane as the Netflix series, and you can read the full thing here. In the meantime, all of Exotic’s nightmares are coming true: Carole Baskin was recently granted control over Exotic’s zoo, Nicolas Cage will soon portray him in a film, and, what’s worse, Jimmy Fallon did an impersonation of Cage impersonating Exotic.