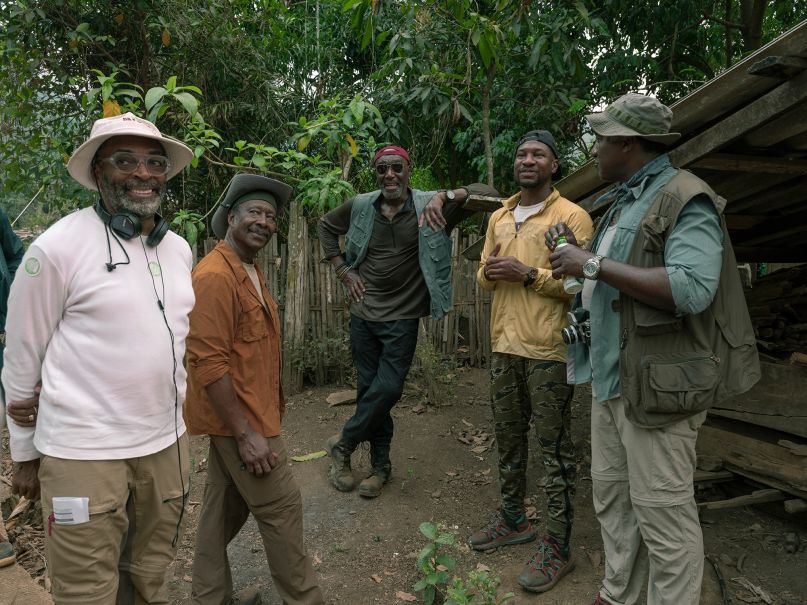 As he’s wont to do, director Spike Lee uses historical context all throughout Da 5 Bloods to describe what happened in the jungles during the Vietnam War. However, the music and musical history utilized to heighten the film’s political milieu is the war drama’s hidden landmine that not only addresses the relevancy of the past but today’s America.

For context, the titular 5 Bloods is comprised of Eddie (Norm Lewis), Otis (Clarke Peters), Melvin (Isiah Whitlock Jr.), David (Jonathan Majors), and Paul (Delroy Lindo) – the same names that come from one of the most successful Motown bands, The Temptations. That’s in addition to Stormin’ Norman (Chadwick Boseman), who represents Norman Whitfield, one of the greatest producers to have ever lived and the founder of the Temptations and longtime collaborator of the legendary Marvin Gaye.

But The Temptations were manicured by Berry Gordy III, the founder of Motown Records, who required all of his acts to equally draw and please the White audience. Gordy III even commissioned a creative team to assist in modifying the Motown flair for the magnitude of success he sought after. So, by naming the cast after the group, Lee reinforces the truth that many Black GIs were tasked to fight for America and its dream.

However, Gaye faces the reality of what the inconceivable truth is – that Black GIs were fighting a meaningless war on the faulty dream of “freedom” for a country that wouldn’t protect their own freedoms. As Lee states in the film, 35% of the soldiers were Black while the population of America’s Black community at the time was only 11%, stressing the unequal representation and exploitation of Black GIs serving in the Vietnam War.

Lee exacerbates that point by bookending Da 5 Bloods with Gaye’s music. The film starts with “Inner City Blues” and ends with Gaye’s vocal take for “What’s Going On”, offering a stark contrast to slickly produced Motown outfit. Because unlike The Temptations, who gave us classic hits in “My Girl”, “Ain’t Too Proud to Beg”, and “Just My Imagination”, Gaye hammered down on what was actually going on in Black America: racial discrimination, poor mental health, a war on drugs, colonization, reparation, and an utter lack of equality.

By leaning on What’s Goin On, which spiritually acts as the soundtrack to Da 5 Bloods, Lee celebrates Gaye’s bold nonconformity as one of the few Black artists of that era to use his platform to address political issues in his community. And he connects that determination to the current Black Lives Matter movement in the film’s closing moments, ultimately making Da 5 Bloods not only an ode to the past but a statement for the present.

As Lee writes in the film…

“Black GI, is it fair to serve more than the White Americans that sent you here? Nothing is more confuse(d) than to be ordered into a war to die or to be maimed for life without the faintest idea of …’What’s Going On?’”