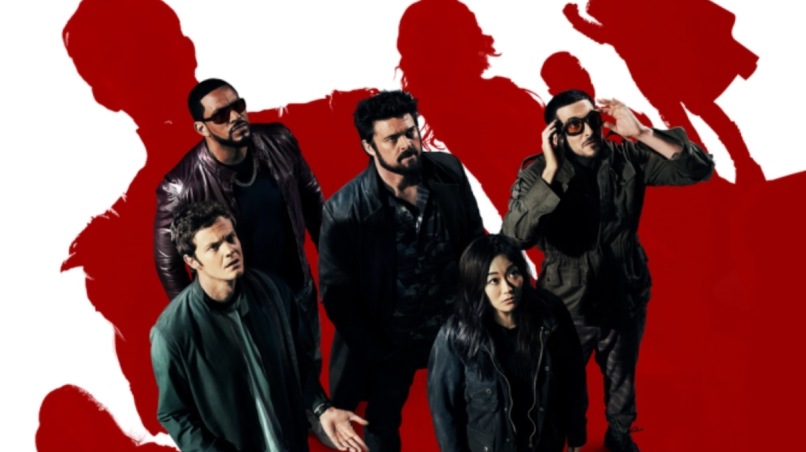 Amazon Prime has announced the Season 2 premiere of The Boys. The superhero deconstruction from Seth Rogen, Evan Goldberg, and Eric Kripke returns September 4th with three new episodes. Future episodes will then be released weekly through October 9th.

The release date was announced during a virtual reunion of the show’s cast hosted by Patton Oswalt, who joins the new season as Tek Knight, a superhero who can only fly in space. The teaser clip features a boardroom pitch to The Seven that hopes to excite them with phrases like, “rousing music,” and “Haaaaaaans Zimmeeer.” Check that out at the 45:25 mark in the video below.

You’ll notice another new face in that clip: Aya Cash, who joins The Seven as new member Stormfront. Earlier in the livestream, her character was introduced with another teaser scene that sees her approaching Homelander (Antony Starr) and Queen Maeve (Dominique McElligott) as they film an ARMY recruitment ad. Seems Stormfront has a major social media presence that could get in the way of The Seven’s image. That scene can be watched by scrolling to 38:37.

But wait, there’s more: To cap off the livestream reunion, Oswalt introduced the violently NSFW first three minutes of The Boys Season 2, Episode 1. Starting at the 47:30 mark, we find CEO Stan Edgar (Giancarlo Esposito) taking over operations of Vought International after the death of Madelyn Stillwell (Eisabeth Shue) at the end of Season 1. As he handles the day-to-day and lunch orders, Black Noir (Nathan Mitchell) takes out some explode-y bad guys overseas.

The entire reunion special, including all the new teaser clips, can be found below.

Based on the comics by Garth Ennis and Darick Robertson, Season 1 of The Boys was a bloody good time, as well as one of our favorite TV shows of 2019. In addition to the names above, the new season sees the return of Erin Moriarty as Starlight, Karl Urban as Billy Butcher, Jack Quaid as Hughie, Jessie T. Usher as A-Train, and Chace Crawford in the role of The Deep.

We've heard your fuckin' whining and moaning about "when is Season 2" so here you go. See you on September 4th, mates. #TheBoysAreBack pic.twitter.com/Q6aS2NvKKk