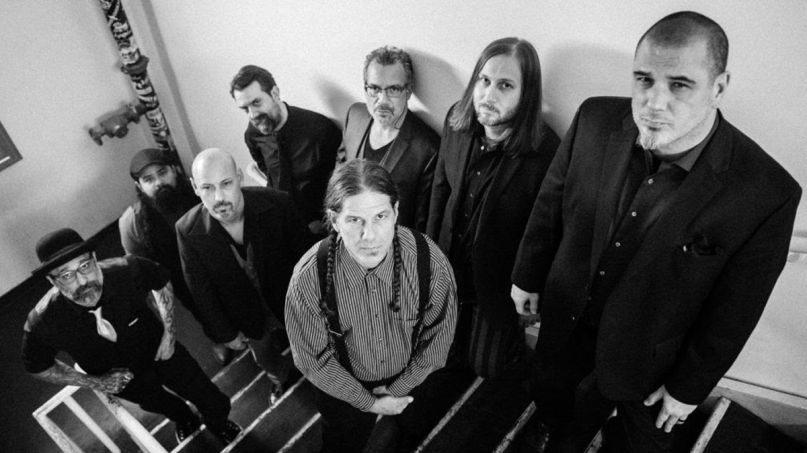 Philip Anselmo’s new ensemble En Minor have announced their debut album, When the Cold Truth Has Worn Its Miserable Welcome Out. The band also shared the album track “Blue”.

En Minor sees Anselmo in a different mood and demeanor than his work with Pantera and his solo band, The Illegals. As opposed to the crushing metal of his other outfits, En Minor is a subdued affair, as the suits in their promo photo suggest. Anselmo sings in a darker, sultry vocal style — sometimes employed during his doomiest moments with Down, fully realized with En Minor. It’s closer to brooding, Mark Lanegan-esque folk rock than metal.

“En Minor isn’t ‘party music,'” Philip Anselmo told Revolver. “This is ‘kill the party music.’ … “We picked ‘Blue’ to release first because it features the whole band, as some songs don’t have percussion. Also, the title of the record, When the Cold Truth Has Worn Its Miserable Welcome Out, is from a line in the song. Very fitting and haunting.”

Anselmo surrounded himself with an eclectic group of journeyman musicians, many having already played with Anselmo in Superjoint and with The Illegals. The album sees contributions from Stephen Taylor (Superjoint, Philip H. Anselmo & The Illegals, Wovenhand, 16 Horsepower), Kevin Bond (Superjoint), Jimmy Bower (Eyehategod, Down, Superjoint), Calvin and Joiner Dover (The Dover Brothers), and Steve Bernal, the former first cellist in the Temple Symphony Orchestra).

The album arrives September 4th via Anselmo’s Housecore Records in North America, and Season of Mist in Europe. The LP was recorded and mixed at Anselmo’s Nodferatu’s Lair Studio, outside of New Orleans. Its songs originate from Anselmo’s lo-fi home recordings in the late ’80s and ’90s — a hidden history of four-track creations that revealed Anselmo, the metal singer, at his most vulnerable and poetic.

“The initial strains — in the most primitive sense — came about when I was given my first guitar at nine-years old,” Anselmo said. “I didn’t have the patience to learn other people’s music, so I wrote my own. And some of those early parts are still prevalent in the songs we’re working with now. Fast-forward to 1988 when I bought my first four-track recorder; those old songs took on a new life and newer songs were written. Heavy metal was at the forefront of my performance-based output, but these little four-track songs were always there.”

When the Cold Truth Has Worn Its Miserable Welcome Out can be pre-order via Housecore Records or Amazon. Stream “Blue” below.

When the Cold Truth Has Worn Its Miserable Welcome Out Artwork: