The musician also played in Lone Star and Waysted, among other bands 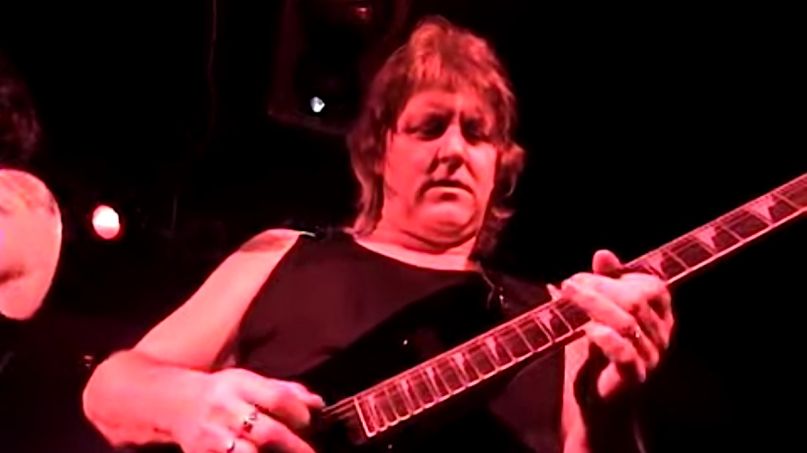 Paul Chapman, former guitarist for the influential UK hard rock and metal band UFO, died Tuesday (June 9th) on his 66th birthday. No cause of death was revealed.

The musician’s death was reported on Facebook by his son, who wrote, “It is with a heavy heart writing this, today is my dads 66th birthday. He passed away earlier this afternoon. He was a brilliant, energetic, loving and most carefree person and the First man I ever loved. Everyone he came in contact with loved him — no ADORED him. Will keep everyone posted on his celebration of life. I appreciate everyone’s thoughts and prayers as his family grieves and processes everything at this time.”

UFO followed this morning (June 10th) with their own statement on social media, commenting, “We send our deepest sympathy to the family and friends of Paul ‘Tonka’ Chapman, who died yesterday, on his 66th birthday. Paul’s son broke the tragic news on Paul’s Facebook page yesterday evening. R.I.P. Tonka.”

Prior to joining UFO, Chapman was briefly a member of the band Skid Row (not the ’80s American metal band, but the Irish blues rock band), in which he replaced famed guitarist Gary Moore. After a year and half, he left Skid Row and joined the band Kimla Taz.

Chapman joined UFO in 1974 as their rhythm guitarist but didn’t stay in the band very long during his first stint. At that time he did not appear on any studio LPs, but he toured to promote the band’s Phenomenon album. He left in January 1975 to form the band Lone Star, releasing two albums with that group.

In 1977, Chapman was recruited by UFO to fill in for guitarist Michael Schenker on tour, and then rejoined the band on a permanent basis in 1978 when Schenker quit the group. During his second stint with UFO, Chapman became the lead guitarist and appeared on four albums: No Place To Run (1980), The Wild, The Willing and The Innocent (1981), Mechanix (1982), and Making Contact (1983).

UFO disbanded in 1983, but regrouped in 1984 with a new lineup that didn’t include Chapman. Instead, he went on to form the band DOA and then joined fellow former UFO member Pete Way in the group Waysted, recording two albums with the latter outfit.

Chapman continued to play in various projects throughout the years, one of the most recent being the lead guitarist for the hard rock band Killer Bee, whom he joined in 2015.

Last year, UFO experienced another loss, when longtime guitarist-keyboard Paul Raymond died of a heart attack. Raymond was an active member of the band at the time of his death.

See Chapman performing “Let It Rain” and “Back Into My Life” with UFO, as well as the tributes from his fellow musicians, below.

We send our deepest sympathy to the family and friends of Paul Tonka Chapman, who died yesterday, on his 66th birthday. Paul's son broke the tragic news on Paul's Facebook page yesterday evening. R.I.P. Tonka pic.twitter.com/JI0XAWOVBS

Just woke up to sad news of Paul Chapman passing. He was my main influence on guitar for many years and a brilliant bloke. Thoughts are with his family. RIP Tonka pic.twitter.com/h993Yj3uOc

I’ve known Paul Chapman since 1982 when UFO and Ozzy toured during Diary of a Madman tour. Outstanding musician and friend. 🙏🏻🎸🙏🏻 https://t.co/cAs4Stcmav

R.I.P. Mr. Paul Chapman!!!! Lovely gentleman and great guitar player!!! I had the great fortune of meeting him in Philadelphia, and L.A., and he was nothing short of amazing to a young dreamer!!!! 66 is much too young!!! pic.twitter.com/ne3bV1I0rp