Robert Trujillo: Metallica Are “Excited” About Material for New Album 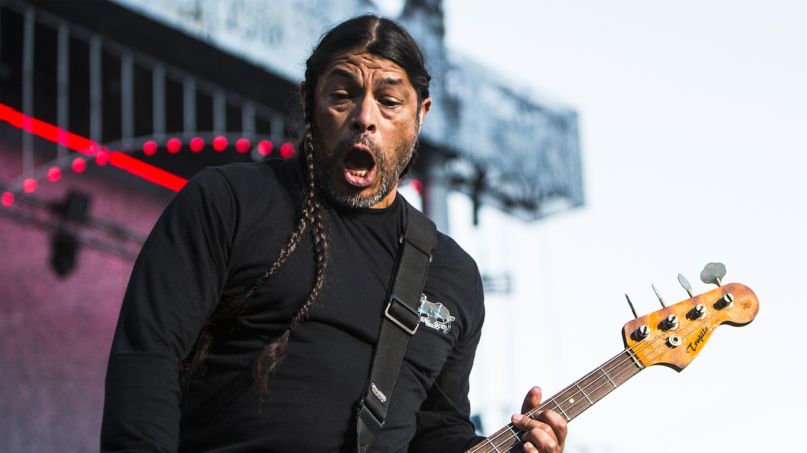 Metallica bassist Robert Trujillo offered some more insight into the band’s creative process while social distancing during the coronavirus pandemic.

Previously, drummer Lars Ulrich had said the band were sharing song ideas over email and Zoom. Trujillo filled out the picture, stating that he’s upgraded his home recording gear and that each member has focused on honing their home studio, working together albeit independently.

“We communicate every week, which is really great, so we have our connection intact,” Trujillo told The Vinyl Guide Podcast. “And what we’ve started doing is basically just really concentrating on our home studios and being creative from our homes and navigating through ideas and building on new ideas. And that’s where we’re at right now. We’re excited about cultivating new ideas, to be honest.

“And everybody’s in a good headspace,” Trujillo continued, “for the most part, and that’s pretty much our focus now — let’s have fun with this. That’s part of the reason I got some updated recording gear and I’m putting ideas together and we’re checking kind of each other’s vibes out on new stuff. And that’s pretty much where we’re at. We haven’t talked about touring lately…”

Metallica were in the home stretch of a lengthy tour in support of 2016’s Hardwired…to Self-Destruct when the pandemic hit and paused live music around the world. The band were forced to postpone or cancel tours of Australia and South America and a string of US festival appearances in 2020.

As the band works toward putting together the highly anticipated follow-up to Hardwired, Trujillo hopes that the time spent working on songs from home will get the band overly prepared when it’s time to finally convene in the studio.

“Obviously, we’ve gotta get through this quarantine and all this stuff that’s happening with that. In the meantime, we’re creating, and I think that is really cool, because sometimes it takes a while to get the band together and get four individuals who are living in different places in the same room. But it’s, like, ‘Hey, guess what? We don’t have to be in the same room right now.’ We can make music from our homes and work together and build stuff — and then we’ll get in that room together and we’ll bang the stuff out, but we’ll be 40 steps ahead.”

As for when to expect a new Metallica album, Trujillo said, “There’s no definite plan as to a release date. I mean, we’re just sort of now cultivating the terrain and getting kind of excited about it, to be honest. It’s kind of a cool thing that we’ve been able to start focusing on that.”

Trujillo’s interview with The Vinyl Guide spanned not only the bassist’s work in Metallica, but also other topics, like the time Sharon Osbourne asked him to re-record Bob Daisley’s bass parts on Ozzy Osbourne’s early solo albums in the midst of the Osbournes’ legal battle with Daisley.

“That was a weird situation, because I didn’t know what we were doing,” Trujillo reflected. “I was asked to do this session and I’m doing it, but I don’t even know why we were doing it. I was employed by Sharon and Ozzy at the time, so I just did what I was told to do. I didn’t look into it too deeply. I forget about it. I forget that that ever even happened. I wasn’t sure, was there other players that played on it, too? So I don’t put a lot of thought into that. I mean, at that time, I would definitely try to play as closely to what [Daisley] did and not bring me into that. For me, Bob Daisley is a tremendous player, and nobody can touch his style and his approach to writing bass or his technique.”

You can listen to the full interview with Trujillo below.