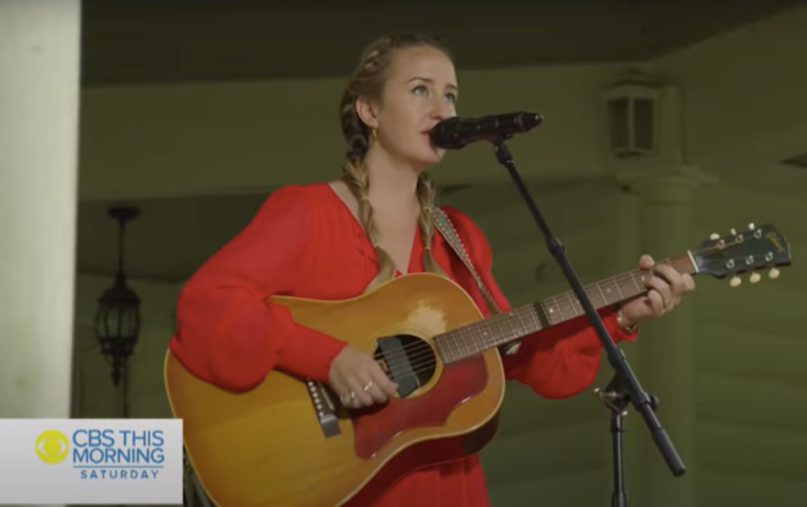 Margo Price served as the latest guest on CBS This Morning: Saturday. She performed her new single “Letting Me Down”, as well as a cover of Bob Dylan’s “Things Have Changed”, and her own b-side, “Drifter”.

For an artist who made her name in Americana and country, she put together a surprisingly rocking set. “Letting Me Down” is already among Price’s most muscular songs, with a ripping electric guitar that keeps the track locked in fifth gear. And while she could’ve chosen a folksier Bob Dylan cover, she instead opted for “Things Have Changed”, the Academy-award winning original song from the 2000 film Wonder Boys. “Things Have Changed” is upbeat and bluesy, and Price pushes her voice outside of its comfort zone. She puts some grind into her phrasing, punctuating her usual crooning with a dash of vocal fry.

She capped off the performance with “Drifter”, an unreleased b-side. “Drifter” combines the wobbly fun of a slide guitar with Dylan-esque historical scope. “I was a native when the ships came in,” she sings, “I was with JFK when they shot him dead.” As a songwriter, Price thrives in specificity, so it’s fun to hear her try something different and go broad. Check out all three songs below.

In the accompanying interview, Margo Price explained her decision to delay the release of her new album That’s How Rumors Get Started, as well as her husband, Jeremy Ivey’s battle with coronavirus. Price said that she was “terrified,” adding that it was, “the worst I’d ever seen him.” She then explained how these negative experiences pushed her back into her music.

“You have to try and make something good out of something bad. In my life, that’s kind of always been the pattern: tragedy, and then processing, and the therapy of making it into art.”

That’s How Rumors Get Started is now scheduled for July 10th. Pre-orders are ongoing. Previously, Margo Price shared the singles “Stone Me” and “Twinkle Twinkle”.

Back in the spring, she performed a Tiny Desk concert and premiered the new song “Someone Else’s Problem”. In May, she released the live album Perfectly Imperfect at the Ryman for charity. Last week, she participated in the star-studded “Picture Show” livestream tribute to John Prine.