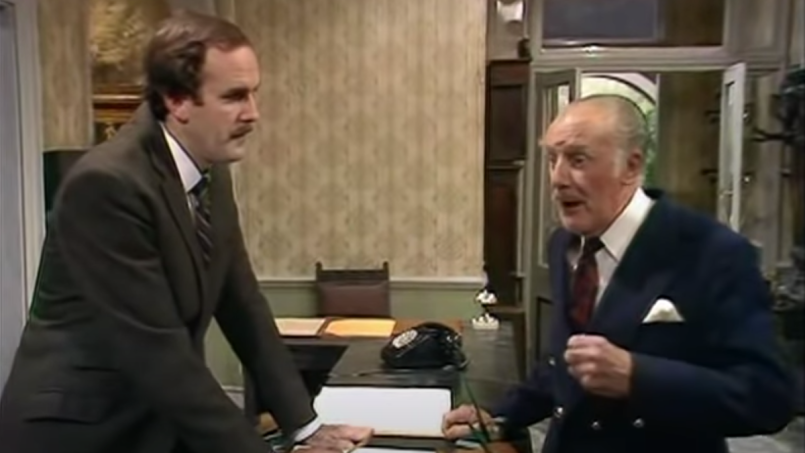 As a wave of media companies are pulling content that could be deemed offensively racist, the BBC-owned UKTV has removed a classic episode of the sitcom Fawlty Towers for its use of racial slurs. The show’s star and writer John Cleese has spoken out against the removal, saying executives trying “to hang onto their jobs” are “too stupid to see that” the episode was mocking the derogatory language, not supporting it.

In the episode, entitled “The Germans”, Cleese’s Basil Fawlty has a conversation with Ballard Berkeley’s Major Gowen. The Major recalls a time he took a woman to a cricket game played by an Indian team, during which he uses racial epithets when referring to Indians (“w*gs”) and West Indians (“n*ggers”). While the episode is remembered fondly for its repetition of the phrase “don’t mention the war” and Fawlty’s fumbling attempts to not upset his German guests, it’s the scene with the Major that has caused UKTV to temporarily remove the episode.

Cleese has responded to the decision, noting that the scene mocks the usage of the language instead of glorifying it. “If you put nonsense words into the mouth of someone you want to make fun of you’re not broadcasting their views, you’re making fun of them,” he told The Age (via Sky News). “The major was an old fossil left over from decades before. We were not supporting his views, we were making fun of them. If they can’t see that, if people are too stupid to see that, what can one say?”

He added that while there is currently a “really admirable feeling that we must make our society less discriminatory,” he thinks “a lot of the people in charge now at the BBC just want to hang on to their jobs.”

“If a few people get excited they pacify them rather than standing their ground as they would have done 30 or 40 years ago,” Cleese said.

The same questionable scene was edited out of a broadcast of Fawlty Towers back in 2013, though Cleese’s management was consulted at the time. That move sparked some backlash from fans who felt the BBC was coddling their audience and not trusting they were smart enough to understand context.

In a statement regarding the current removal, UKTV said they’d pulled “The Germans” to review it. “We regularly review older content to ensure it meets audience expectations and are particularly aware of the impact of outdated language,” they wrote. “Some shows carry warnings and others are edited. We want to take time to consider our options for this episode.”

Find the full statement below.

This is just the latest example of the entertainment industry attempting to respond to the increased call to battle institutionalized racism that’s arisen in the wake of George Floyd’s death and worldwide protests. Netflix has pulled a number of British comedies, including The Mighty Boosh and The League of Gentlemen, over their uses of blackface. Gone with the Wind was removed from HBO Max so a prefix denouncing the film’s “racist depictions” could be added. Yesterday, country trio Lady Antebellum announced they’d changed their name to Lady A, a move that some have found ill-considered, as the “A” logically still stands for “Antebellum.”

An update on Fawlty Towers for our viewers pic.twitter.com/O0kFR4Md8E