“Look, I don’t know if I’m going to have a career after this, but fuck that" 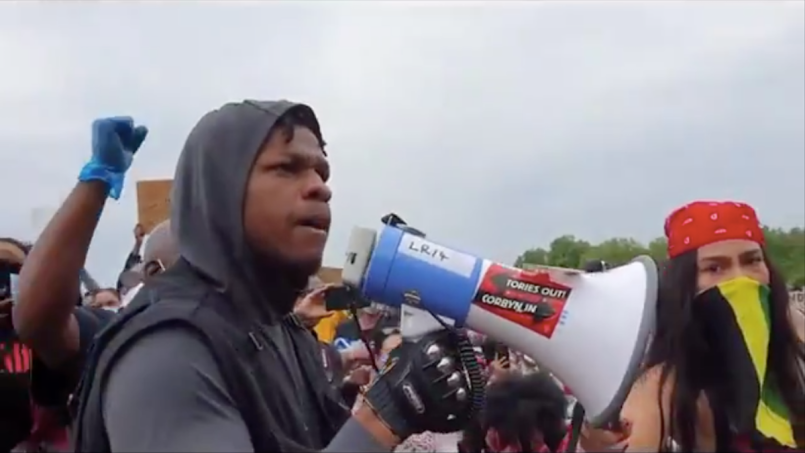 Star Wars actor John Boyega gained prominence by playing a First Order stormtrooper who experiences an awakening and joins the Resistance. Now, at a Black Lives Matter protest in London, Boyega gave a resistance speech more powerful than any dialogue written for him in those movies.

This isn’t the first time Boyega has spoken his mind about issues affecting people of color. After the murder of George Floyd by a white Minneapolis police officer, Boyega went off on social media, saying “I really fucking hate racists.”

Now, via Variety and as seen in video clips on Twitter, Boyega addressed a crowd of thousands gathered in Hyde Park. It was part of a global day of protest in response to George Floyd’s killing. Gripping a megaphone, Boyega told the assembly, “I’m speaking to you from my heart.” He added, “Look, I don’t know if I’m going to have a career after this, but fuck that.”

In one of the more resonant moments, Boyega listed off the names of alleged victims of police violence. He said,

He concluded by saying that, “It’s very, very important that we keep control of this moment, and we make this as peaceful as possible.” Afterwards, he marched with protestors to 10 Downing Street and the residence of Prime Minister Boris Johnson to continue the movement.

While some in Hollywood may take issue with Boyega’s frankness, it probably won’t hurt his career. Super producer Jordan Peele retweeted the resistance hero’s remarks, along with the words, “We got you, John.” Check out photos and clips from John Boyega’s speech below.

Update: Lucasfilm has also expressed its support of Boyega, calling the actor “our hero.”

Other celebrities have also been speaking out about George Floyd’s murder. Billie Eilish lashed out at the All Lives Matter movement, while Taylor Swift slammed Donald Trump for “stoking the fires of white supremacy and racism.” Lil Wayne had a slightly different perspective, saying, “If we want to place the blame on anybody, it should be ourselves.” Meanwhile, Killer Mike addressed his neighbors in Atlanta and delivered a speech for the ages.