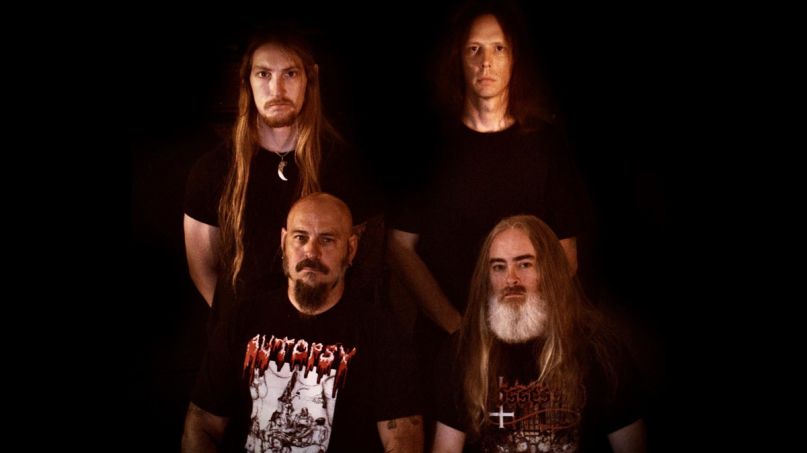 Death metal veterans Incantation will return with a new album, Sect of Vile Divinities, this summer. In anticipation, the quartet shared the first single, the crushing “Propitiation”.

Incantation are one of the longest running American death metal institutions, with Sect of Vile Divinities being their 12th proper full-length since forming in New Jersey in 1989. The album arrives August 21st via Relapse Records.

“Propitiation” maintains the band’s high standard of dynamic, riff-filled death metal that defines their lengthy career. The track opens with trudging doom tempos and sustained chords. The guttural vocals don’t come in until nearly halfway into the song, where it picks up in speed.

In a concert setting, this would cue the mosh pit — of which Incantation are quite familiar. In the song’s lyric video, concert photography shows the band performing onstage. It evokes the sense of hearing the song live, a vital part of the death metal underground that Incantation has inhabited for decades.

The band has seen a revolving door lineup through the years, with guitarist/vocalist John McEntee being its only consistent member. Current drummer Kyle Severn has been an off-and-on member, rejoining in 2009. Bassist Chuck Sherwood joined in 2008, and Sonny Lombardozzi arrived in 2017, replacing Alex Bouks, who left the band in 2014.

Incantation are perhaps best known for their first three albums, Onward to Golgotha (1992), Mortal Throne of Nazarene (1994), and Diabolical Conquest (1998). Each was released during the early days of Relapse Records, which has remained the band’s label home, and pioneered the death metal sound during the scene’s formative years.

Pre-order Sect of Vile Divinities via Relapse and digitally here. Watch the lyric video for “Propitiation” below.