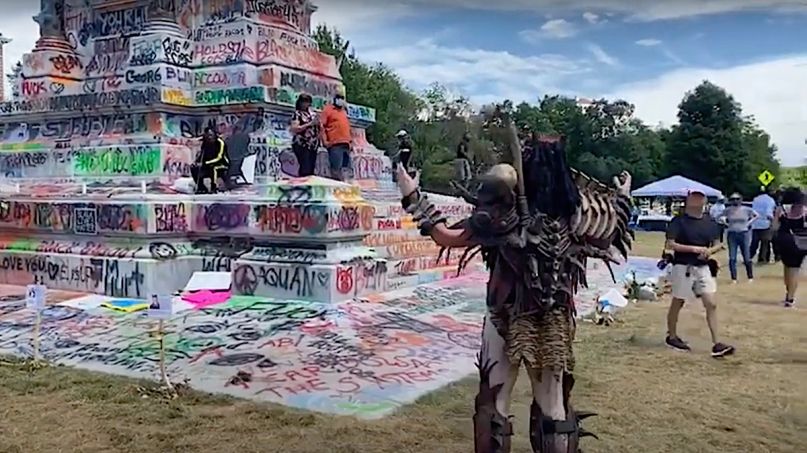 A petition to replace a statue of Robert E. Lee in Richmond, Virginia, with one of late GWAR frontman Oderus Urungus has now racked up more than 30,000 signatures. Today (June 12th), drummer JiZMak Da Gusha paid a visit to the statue of the Confederate general, urging onlookers to add their names to the cause.

In a video just posted to GWAR’s YouTube page, JiZMak Da Gusha can be seen approaching the crowd at the now-defaced Robert E. Lee statue, which has been completely tagged with graffiti. He greets them with a resounding “GWAR is here!!”

Someone then comments, “I think you’re the one going on top, aren’t you?”, mistaking Da Gusha for the late Oderus. But Da Gusha doesn’t correct him, answering, “There’s a petition to put GWAR on that horse instead of Robert E. Lee. I strongly encourage that everyone signs that petition online.”

The video closes with Da Gusha looking up at Robert E. Lee on top of the horse, and exclaiming, “F**k that guy!”

As previously reported, the Change.org petition calls Robert E. Lee a “failed war general that supported a racist cause,” while praising Oderus (real name Dave Brockie) as a “great local leader” who “called Richmond his home, working with the local art community and employing local artists and ladies of the night.”

In Richmond and other cities, statues of Christopher Columbus and other controversial figures have been toppled in recent days, as protests continue following the killing of George Floyd in police custody.

Watch the video of JiZMak Da Gusha’s visit to the Robert E. Lee statue below.