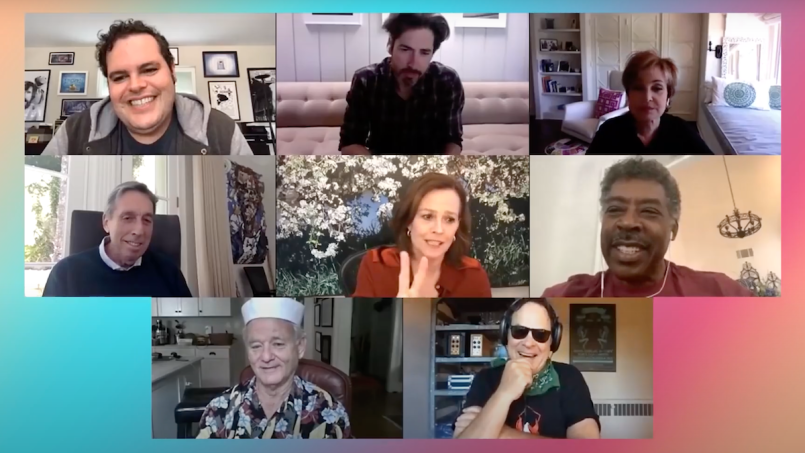 Since the start of lockdown, Josh Gad’s YouTube series Reunited Apart has digitally brought together casts of classic cinema like Goonies and Back to the Future. On the latest episode, the team behind Ghostbusters were the ones to answer the Zoom call.

Besides the ever-resistant Rick Moranis, all the films’ surviving stars were present: Bill Murray, Dan Aykroyd, Ernie Hudson, Sigourney Weaver, and Annie Potts. Director Ivan Reitman was also present, as was his son, Jason Reitman, who is helming the upcoming sequel to the original franchise, Ghostbusters: Afterlife. There were also a number of surprise guests, including William Atherton (Walter Peck), and actors with bit parts like Steven Tash and Jennifer Runyon (the students Murray’s Peter Venkmen shocks in the second Ghostbusters scene), Michael Ensign (the Sedgewick Hotel manager), and Timothy Carhart (the violinist “boyfriend” of Weaver’s Dana Barrett).

The final addition was musician Ray Parker Jr., famed for creating the “Ghostbusters” theme. He closed out the reunion by performing the memorable song, with the whole crew screaming along to the “Ghostbusters!” chant.

Before they got there, though, the cast reminisced about some moments from the film. The elder Reitman recalled Weaver coming up with the idea of Dana turning into a terror dog, while Weaver talked about Murray improvising the “they hate this” piano scene. Murray, in turn, remembered a turning point in the production was when Reitman showed them a rough edit of the ballroom scene (when the Ghostbusters capture Slimer) during Thanksgiving dinner at the director’s house.

“I remember going back to work on Monday and saying, ‘Guys, let’s all calm down. This is gonna be really big,'” Murray said.

The whole cast paid tribute to the late Harold Ramis, and later ran through some of the movie’s classic lines with the help of super-fan Kumail Nanjiani. Murray was particularly tickled by Atherton’s delivery of, “What is the magic word, Mr. Venkmen,” and laughed about how Gozer’s utterance of “Choose and perish” often sounded like “Jews and berries.”

There were plenty more memories and behind-the-scenes stories shared, as well as a final cameo by a certain iconic new reporter to cap it all off. The episode even ended with a teaser for the next Reunited Together, which suggested that Gad is readying a chat with the Ferris Bueller cast. Watch the entirety of Reunited Apart: Ghostbusters below.

The streaming event raised donations for the Equal Justice Initiative. As of this writing, about $4,300 dollars have been raised, with an additional $125,000 coming from Reunited Apart sponsor Barefoot Wine.