Off the forthcoming EP Flight Tower 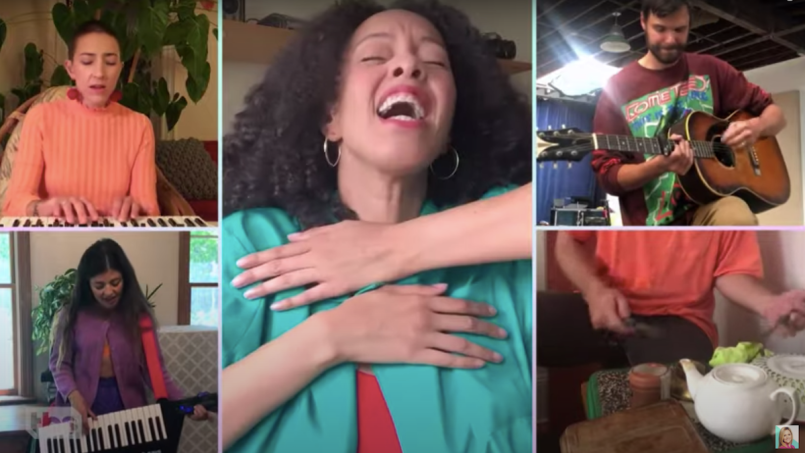 Dirty Projectors drove to Samantha Bee’s shed in the woods to perform a live — but still socially distanced — rendition of “Lose Your Love”.

“Lose Your Love” is the lead single from the forthcoming Flight Tower, the second installment in a planned five-EP series. Each of the first four releases will feature lead vocals from a different member of the band, with the fifth and final installment bringing everyone together. Out June 26th, Flight Tower is helmed by keyboardist/percussionist Felicia Douglass, and to judge from the performance on Full Frontal, she’s having a ball.

The original version of “Lose Your Love” is baroque in its arrangement, utilizing the full powers of the studio to create a richly-textured soundscape. In contrast, the performance in Samantha Bee’s shed feels stripped down and handmade. Mike Daniel Johnson drums out the percussion on a teapot on the kitchen table, while Maia Friedman and Kristin Slipp hold down the rhythm section on a pair of keyboards. Frontman Dave Longstreth takes a backseat, highlighting the proceedings with flourishes on the acoustic guitar. Altogether it’s a lovely companion to the studio version, and you can check it out below.

Pre-orders for Flight Tower have already begun, and a separate pre-order nets you a box set collection of all five EPs. Last week, the band dropped Flight Tower’s second single, “Inner World”. In March, the Dirty Projectors released Windows Open, the first installment in the series led by Maia Friedman. Next up is an EP captained by Kristin Slipp, and the fourth edition comes from Dave Longstreth.