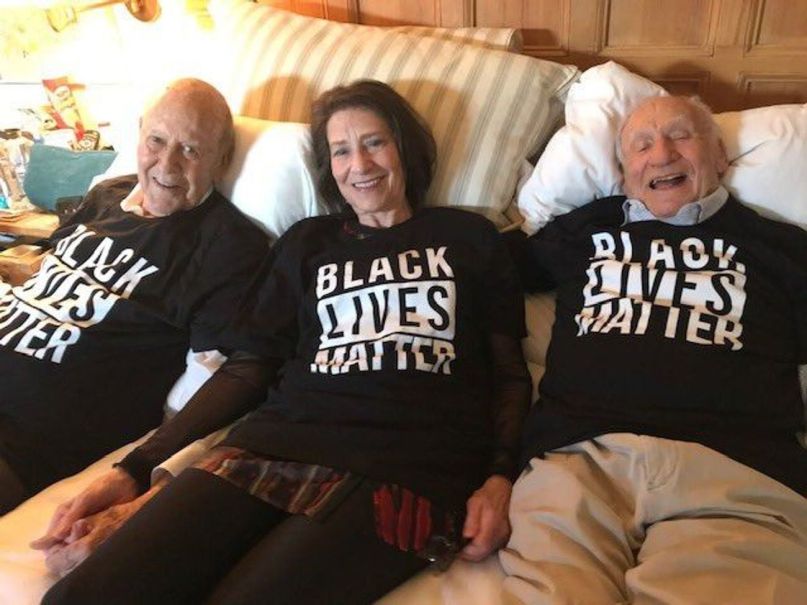 Carl Reiner, the legendary comedian, actor, and director whose career spanned seven decades, passed away Monday night at the age of 98. In the wake of his passing, close friends, family, and colleagues all offered their thoughts and condolences.

His son, Rob, mourned the loss of his father early this morning on Twitter, writing: “Last night my dad passed away. As I write this my heart is hurting. He was my guiding light.”

Carl was a giant, unmatched in his contributions to entertainment. He created comedy gems like The Dick Van Dyke Show, The Jerk and Where’s Poppa? I met him in 1950 when he joined Sid Caesar on Your Show of Shows and we’ve been best friends ever since. I loved him. When we were doing The 2000 Year Old Man together there was no better straight man in the world. So whether he wrote or performed or he was just your best friend—nobody could do it better. He’ll be greatly missed. A tired cliché in times like this, but in Carl Reiner’s case it’s absolutely true. He will be greatly missed.

Steve Martin, Reiner’s comedic muse for The Jerk, Dead Men Don’t Wear Plaid, The Man with Two Brains, and All of Me, tweeted, “Goodbye to my greatest mentor in movies and in life. Thank you, dear Carl.”

Dick Van Dyke, the titular star of Reiner’s iconic TV series, paid his respects on Twitter: “My idol, Carl Reiner, wrote about the human comedy. He had a deeper understanding of the human condition, than I think even he was aware of. Kind, gentle, compassionate, empathetic and wise. His scripts were never just funny, they always had something to say about us.”

His Ocean‘s trilogy co-star George Clooney also released a statement, writing: “Carl Reiner made every room he walked into funnier, smarter, kinder. It all seemed so effortless. What an incredible gift he gave us all. His was a life well lived and we’re all the better for it. Rest in peace my friend.”

Last night my dad passed away. As I write this my heart is hurting. He was my guiding light.

My idol, Carl Reiner, wrote about the human comedy. He had a deeper understanding of the human condition, than I think even he was aware of. Kind, gentle, compassionate, empathetic and wise. His scripts were never just funny, they always had something to say about us.

Goodbye to my greatest mentor in movies and in life. Thank you, dear Carl. https://t.co/H7A4ZwIqfc

The great #CarlReiner has gone to that Show of Shows in the sky. I worked with him, loved him, and consider myself one of the luckiest people in the world to have once attended lunch with his hilarious, guarrulous gang…

My friend Carl Reiner died last night. His talent will live on for a long time, but the loss of his kindness and decency leaves a hole in our hearts. We love you, Carl. pic.twitter.com/QWyNOYILhW

So sad to hear about @carlreiner Not only did he make my favorite TV& movies (see:Where’s Poppa) but his humanity was beyond compare. His heart was so full of love. Never left his house empty handed- book, space pen, Swiss Army knife. RIP to a man that embodies the word mensch pic.twitter.com/mazBmwznkX

Carl Reiner was comedy genius. Often that genius made other funny people even funnier. But give him a stage and he could spin laughter out of any moment. I watched him do it time and again. His contributions to comedy are eternal. And a lovely man, as well. #ripCarlReiner

I’ve known Carl Reiner my whole life and I can’t imagine a world without him. A loss for me, a loss for my family, a loss for all of us.

@carlreiner was a gift to us all.
Hilarious,brilliant and always a gentleman. My relationship with him will always be cherished. He was a hero to me and all of us in comedy have lost a giant. All my love to Rob and the family.

R.I.P. Carl Reiner. Growing up Carl was like a second dad to me. He was the greatest. Not just as a comic legend but as a man. There was no one else this funny and this nice. I loved him.

Carl Reiner
RIP
One of our comedy heroes
Thank you for everything you did for all of us
Love to the Reiner family pic.twitter.com/tBsiIelbdI

Even at 98, it was too soon to lose @carlreiner – a brilliantly funny, kind and prolific man. Love to the excellent family and friends he left behind

Condolences to the family of Carl Reiner. From the writers room of Sid Caesar to recreating those times for the Dick Van Dyke show, Carl was a master at his craft. I knew him only peripherally but it was a pleasure to have known him.😞

out of respect and appreciation for @carlreiner ‘s wit, intelligence, heart & boundless energy to create and express, I am retweeting the messages he sent on his last two days with us on the planet. What an inspiration. https://t.co/URwA4AIYT3

Carl Reiner was everything, every human being alive should hold up as a bright example of what one person can do with theirs. A great loss for his family and the world. 📷Al Sieb https://t.co/bImuCKqJsu

It will take a while to process losing Carl Reiner because he’s been making me laugh since I was little. That’s some very funny processing helping leaven the sadness. Thank you, Carl. You done good.

He was one of the greatest comedy minds of our time. And one of the kindest people I’ve ever had the pleasure of meeting. RIP Carl Reiner.