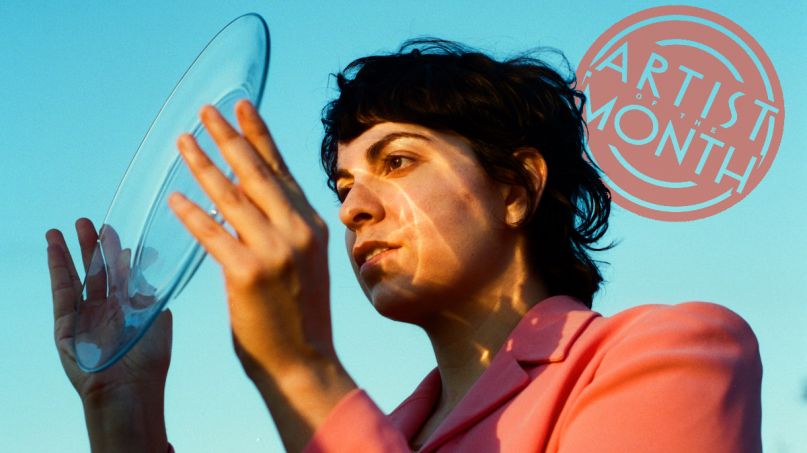 Becca Mancari Artist of the Month, photo by Zac Farro

After hitting 16 flights visiting 15 countries in 30 days on a European tour with Julien Baker, Becca Mancari was exhausted. She came home, fired her then-manager — and went right back to Europe for a headlining trek of her own.

“You know when you’re just at the place where you’re like, I actually don’t think I know a pathway forward?” Mancari tells Consequence of Sound on a call from her Nashville residence. “I just remember being some-fucking-where in the Netherlands and being like, ‘I don’t think I can run anymore.'”

Ten years earlier, Mancari had come out to her fundamentalist Christian family, a revelation that, to put it lightly, was not taken well. Leaving home, her journey of self-discovery and quest for acceptance took her around the world, eventually landing her in Nashville to pursue a music career. She released her well-received debut album, Good Woman, in 2017, leading to enough acclaim for her to book those European tours. Yet, as open as that effort was, Mancari was still skirting serious issues of identity — both personally and artistically.

When it all finally caught up to her, “the songs were given to me,” she says. “I couldn’t even stop it … When I had that line in ‘First Time’ come to me — ‘I remember the first time my dad didn’t hug me back’ — I remember trying not to write it. I was like, ‘Don’t do it. You’ll cross the line and never get it back.’ But I knew I had to go forward.”

And onward she went, creating her sophomore album, The Greatest Part, with her friend and Paramore drummer Zac Farro at her side as producer and collaborator. Out June 26th via Captured Tracks, the LP is a coming out album written a decade after the actual coming out. The growth Mancari underwent in the interim gave her the perspective to address the abandonment, trauma, and beauty of her story with strength instead of sadness. Even a song like “I’m Sorry”, about not being ready to let go of that anger, finds power in self-awareness.

As The Greatest Part leans harder into the indie rock sounds of Mancari’s youth, it also finds her digging deeper into her own story, unearthing universal themes in an era when the parallels between people feel more important than ever. Read ahead to find out more about how Mancari got to this point and how it feels to release a collection like this in times like these.

You can also purchase The Greatest Part on here, or sign up for a 60-day free trial of Tidal to stream it in HiFi.

On Releasing Music During the Current Sociopolitical Unrest

I’m learning so much, so I feel like every time I try to speak, I’m like, I should probably just listen. That’s where I’m at at this point. Everything, at least with the movement, it’s about listening for me. So, I do feel it’s hard to speak, and it’s hard to be interviewed, but you know, staying focused on how I am as a musician, I still believe in art, and I still believe in the power of using our voices to amplify other voices. And so in that way, I feel like I’m trying to reconcile my own feelings with just wanting to disappear in a lot of ways. It’s complicated. It’s not easy and that’s okay. And you know, I’m here for it. And I think that a lot of us feel like there is no going back to normal and that it’s beautiful, but we’re all in those growing pains.

It still feels really powerful in this moment to be a queer person. A lot of us, if we’re not in the black community, we recognize that our rights were started by the Civil Rights movement. Stonewall was started by a Black drag queen. That is, to me, indicative that the movement is on the minorities; the movement is not the majority and that’s the power. It’s the power from the bottom up. I feel really thankful too, and I just want to share the music. I think it’s still necessary and it’s okay for me not to even qualify it. Listen to it, and I hope people feel heard and seen. And that goes for everyone: I don’t write music for queer folk; I write it for everyone.

On Working with Paramore’s Zac Farro as Producer

It was actually amazing because we’ve been friends. It wasn’t just like, “Oh, I want Zac Farro.” We’re truly best friends. We’ve known each other for seven years and just been like family. Like we spent the holidays together kind of close, you know? He always saw something in me, even that I had kind of snuffed out when I had moved to Nashville, in that I think I wanted to fit in when I really didn’t fit in in this city. I didn’t grow up on country music; I didn’t know anything about country music. And so he was like, “What are your roots?” And I was like, “Well, indie music. That’s what I grew up listening to.” And he was like, “Cool, that’s what you are. Why are you not doing that?” And I was like, “Okay. Yeah. I mean, you’re right.”

The reason why we started working together, it was initially just going to be a writing thing. We were like, “Okay, let’s just write something, just figure it out. We always connected, so let’s try this.” And the first time that we started, I had the beginning of this song “Pretend”. And I just thought about him when I wrote it. I was like, “Man, this is totally a Zac vibe.” Then it just kind of shot from there. Then he’s just like, “Okay, why don’t we actually demo these? Let’s just try it.” So it was a little sneaky, I think. I don’t even know if he would say this, but I think he was like hinting at himself.

On Other The Greatest Part Collaborators

Juan Solórzano is the literal king of slide guitar. I fought for that one because he’s one of my oldest friends here, too, and Zac didn’t know him. So he’s like, “Okay…” and then as soon as Juan started playing, he was like, “Oh, you’re right.” [laughs] He just brought the songs to the next level; his involvement is just so crucial. He is my number-one collaborator in music.

Julien [Baker] and I became friends when I opened for her for like a month in Europe in 2018. We actually hadn’t known each other when we went on tour together, and we became friends. She sang on “First Time” and “I’m Sorry”. “First Time”, for sure, that one for me felt like the right song for her because of her own background and being queer. I wanted a queer voice on that one with me. And “I’m Sorry” is all about not wanting to let go of the pain that you feel went from the abandonment, from the loss, and you want to hold it in your body. And she was like, “Oh yeah, I know what that’s like.” And she just killed it, man. Literally, it was like two takes and we’re like, “Yeah, that’s incredible. So, you’re done.”

On Writing a Coming-Out Record Years After Actually Coming Out

I have realized through talking about it that don’t think I understood it when I was actually in it and doing it. Now, after it was out of me, I was like “Wow, that’s why.” It was very strange. I will tell you, I think a lot of people with trauma think they experience this: When you are in the midst of it, when it’s in the moment, you have a choice. Either I’m going to survive this, or this is gonna literally, and maybe not even figuratively, this is going to kill me. I felt that way. And it was very emotional for me to even say that the first time where I realized I physically felt like I don’t know if I would have made it to right now, if I would’ve gone there [before]. I had to try to live to figure out how to say these things and be able to survive it. So, this to me feels like the next chapter. In life, we never, reach the end of our evolution, but I hope it’s the next chapter of enlightenment and freedom from that running-away feeling. I feel like I’ve been running for 10 years, so I was running and running for 10 years just to try to live.

On Not Touring and Sitting with Yourself During the Pandemic

I will say it’s one of the hardest things I’ve ever done. You know, just, I don’t know how to not be in motion. Movement is in my DNA… The pandemic has taken everything from us. We were just so stripped raw at this point so I was just like, I’m actually going to go to therapy. Now is the time. You wanted to get to the next chapter, then you got to do the work to do it.

I’ll be honest, it’s definitely not easy. It’s not easy on on my interpersonal life, on my family, that relationship. I know I want to get out there, I want to sing these songs. I’m ready to sing them. But at the same time, I’m given this time to actually not run, and actually to heal, and actually hopefully write even a better record one day. And isn’t that amazing? That our lives are meant to get even deeper into becoming the artists that we’re supposed to be. So I am going into that now with hope and new eyes on what is it to be a musician. I feel like the sentiment of things are going to forever change is going to happen. And I think you’re going to actually see better and better art. I really believe that.

[We were playing Newport Folk Festival in 2018] and I was like, “Oh my God, we’re at Newport.” I think we all did kind of get nervous all of a sudden, because you’re like, “Oh shit. We’re doing a festival now. How did this happen?” And then I see, as we’re walking on, all these artists standing side-stage to watch us, including Courtney Barnett, who I just think is the Queen. And she’s just like clapping! And we got off the stage and she’s just so beaming. I just remember, she came up to us and we were talking — and it was just in that moment being like, everybody got it. Like I think all the women, all the queer folk, all trans folk, all people of color, they were like, “Thank you! This group is like … thank you. We need this.”

And also just to have fun. That is probably the biggest thing I learned from that band was just do not take yourself so seriously. Connect to your audience and make jokes. Make people’s day a little bit better. That’s why I wanted my record to sound the way that it does. ‘Cause I want people to be like, “Oh, is this a bop? Or is this like the saddest song I’ve ever heard?” I’m not sure; I think they’re both.