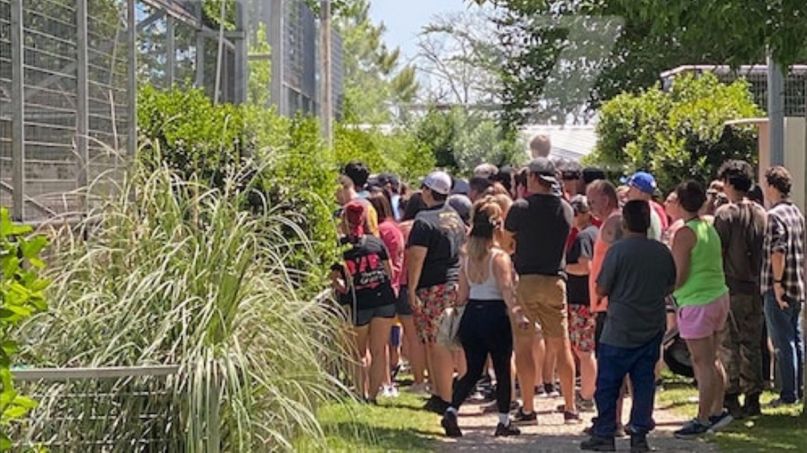 Netflix docuseries Tiger King was a perfect storm: ridiculous characters, mockable music, and a release date that caught freshly quarantined Americans itching for something new to watch. This past weekend, the infamous zoo at the center of it all held its grand reopening since closing due to the coronavirus pandemic. Unsurprisingly, fans flocked to the zoo to rub elbows with the villainous celebrities — blatantly ignoring social distancing guidelines in the process.

Recently renamed “Tiger King Park” to capitalize on every inch of newfound fame, the zoo was packed with hundreds of paying visitors throughout the weekend, reports TMZ. The demand was so high that a line snaked around the Wynnewood, Oklahoma lot.

Allegedly Tiger King Park reopened under “new CDC social distancing and sanitation protocols.” Video footage of tourists would suggest they’re failing on that front. Patrons can be seen standing shoulder to shoulder while listening to tour guides and, elsewhere, squeezed side-by-side for a chance to hold young cubs.

If people wanted to risk getting COVID-19 to shake hands with owner Jeff Lowe, his wife Lauren Lowe, alleged hitman Allen Glover, or zookeeper Erik Cowie, then it looks like they choose the right days to do so. All four were on the premises and happy to meet with Tiger King fans who paid to get in. Carole Baskin and Dr. Fauci would be disappointed in all of them.

Of course, the irony of all of this is that Joe Exotic, the guy who built G.W. Zoo and the Netflix series revolves around, can’t witness any of this in person. He’s currently in jail for numerous animal rights charges and hiring a hitman to kill Baskin, who many believe should be re-investigated for possibly killing her husband. There’s a chance Joe Exotic could be released soon, though, as he’s formally asking Donald Trump for a pardon and the president said he’d “take a look” at it.

With all the attention Tiger King has gotten, it’s no wonder the zoo is a tourist hot-spot. Reno 911’s Thomas Lennon impersonated Joe Exotic on Colbert, The Offspring covered “Here Kitty Kitty”, and it even prompted a bonus episode to be filmed last minute to meet demand. Hell, when Nicolas Cage is hired to portray you in a scripted series, then you know you’ve reached the peak of so-bad-it’s-good pop culture.