Van Etten has also announced a full album performance of her debut LP, because i was in love 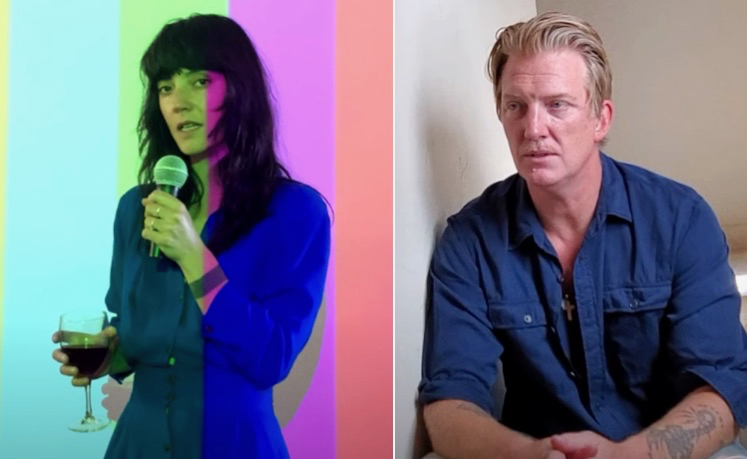 Sharon Van Etten and Josh Homme’s cover of “(What’s So Funny ‘Bout) Peace, Love and Understanding” wasn’t intentionally made for the quarantine era. “Recording this song had nothing to do with what we’d be going through… until we started going through it,” explains Homme in a statement. But while the track itself wasn’t intended to be an anthem of isolated times, its new music video fully embraces the state of the world.

Directed by Matthew Daniel Siskin, the clip captures Van Etten and Homme at home with their families. The former’s kid plays around with an empty inflatable swimming pool while she sips a glass of wine and sings karaoke in front of a projection of SMPTE color bars. Homme, meanwhile, chases his three little ones around the house, patting their heads and giving warm group hugs.

It’s a sweet look at family life during quarantine, made all the more touching by cameos from “(What’s So Funny ‘Bout)” songwriter Nick Lowe and the cover’s producer/bassist Zach Dawes. Take a look down below.

In addition to the video, Van Etten has shared details about an upcoming ticketed livestream event to celebrate the anniversary of her debut album, 2009’s because i was in love. Now, the 11th anniversary of something isn’t usually cause for special commemoration, but Van Etten found our current situation and the recording of the LP somewhat analogous.

“I wrote my debut album, because i was in love, in a sort of self imposed quarantine — alone with an acoustic guitar in my parents basement,” she said in a press release. “With the album’s anniversary approaching and most of us still in a stay at home mode, I thought it would be meaningful to play the entire album live, from start to finish, in the way it was conceived- solo, with only my acoustic guitar.”

Livestreaming from Van Etten’s Los Angeles home, the event takes place Friday, May 29th at 5:00 p.m. ET/2:00 p.m. PT. Proceeds from ticket sales benefit Van Etten’s band and crew, as well as the National Independent Venue Association to help them provide financial support to the nation’s independent venues and promoters in these tough times. Tickets are priced at $12, with bundles featuring exclusive posters available for $25; get them via Seated.