10 Famous Beatles Locations You Can Visit

Between London and Liverpool, the Fab Four's history comes to life before your kaleidoscope eyes 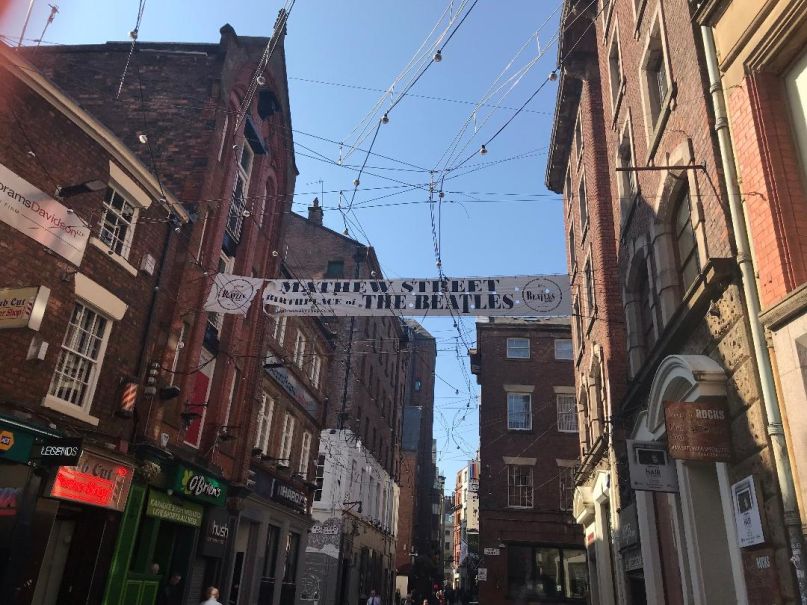 Matthew Street -"Birthplace of The Beatles", photo by Lindsay Teske
view all
Next

On Location is a new series that brings to life the places you know from songs, album covers, and music history. Consider it a blur between travel guide and liner notes to your favorite albums.

The Beatles: you’ve heard the songs, seen the footage, and heard about the places. What you may not have done yet, though, is step into their world. The Midas touch of the Fab Four has turned everyday locations from London to Liverpool — such as a crosswalk, an office building, a local street, and a pub — into some of the most iconic locations in music history.

To see these locations in person for the first time is like finally being in the same place as a partner with whom you’re in a long-distance relationship: they’re always there, but to be able to actually see them adds an almost indescribable level of surrealism. The familiar comes to life in a way that is completely anew, and as a result, the regular feels revolutionary.

Between London and Liverpool, opportunities to see some of the most seminal spots in Beatles history are abundant. From locations that inspired hit songs to the venues where significant performances took place, you can immerse yourself in the “places you’ll remember” having heard of and some that will be completely new — all of which act as cornerstones in The Beatles’ legacy.

Click ahead to discover 10 legendary Beatles places you can visit…

With just the tap of your Oyster card, you can step inside one of the most iconic album covers in music history. The northwest London crosswalk that the Fab Four blasted into notoriety after including it on the cover of their album Abbey Road is yours for the taking (in fact, it was recently updated with a fresh coat of paint, so when it’s safe to travel again, you’ll be able to see it in better form than ever). Whether you want to take photos or simply absorb the thrill of literally following in the footsteps of John, Paul, Ringo, and George, the Abbey Road crosswalk is one of the most exciting destinations for any Beatles fan to visit.

Helpful Hint: As you can probably imagine, the crosswalk sees a steady stream of visitors eager to snap photos during daylight hours. So, if you’d still like to do so but aren’t feeling keen on dealing with a crowd, arriving earlier in the day will be your best bet. On the other hand, if you’re not planning to take photos but still want the novelty experience of having walked the crosswalk, you may prefer to visit during the evening. Most importantly, though, be safe! Abbey Road is still a busy street, and cars will be passing through at all hours of the day.

Just up the street from the Abbey Road crosswalk is the legendary recording studio of the same name, where The Beatles famously recorded a notable amount of their discography. Visitors can take photos of the studio’s entrance, write on the ever-popular graffiti wall outside, and browse its shop (which, as you can imagine, has no shortage of Beatles merchandise). Or, if you’re an artist, you can inquire about booking studio space to record a project. Regardless of how you choose to spend your visit to Abbey Road Studios, you’ll be able to come away saying that you’ve been to the place where dozens of iconic songs were born.

Cost to Visit: Free excluding cost of transportation. Costs may vary depending on any gift shop and/or studio rental purchases made.

Helpful Hint: If the crosswalk is too crowded for your liking, visiting Abbey Road Studios can be a fun way to wait out the masses while doing another Beatles-related activity.

Those who have seen A Hard Day’s Night will recall the pandemonium-filled opening sequence in which The Beatles run into a train station while being chased by a swarm of fans. Well, you can step back into the brink of Beatlemania yourself by visiting the filming location. The sequence was filmed at Marylebone Station, which is tucked away in northwest London. The best part? Marylebone Station still bears similarity to the way it looked in the film 56 years ago (particularly its exterior awning), so visitors will be able to see sights they’ve only ever taken in onscreen come alive before their eyes.

Closest Underground Station: If you hop on the Bakerloo line, Marylebone is one of the stops.

Helpful Hint: In addition to the Bakerloo line, Marylebone Station also houses select national rail services. So, you can easily explore the station before taking a day trip to another city in England. Just don’t be late — otherwise you’ll be doing a mad dash through Marleybone just like The Beatles did.

The stage at Prince of Wales Theatre is currently home to the musical The Book of Mormon, but 57 years earlier, it became the site of one of The Beatles’ most memorable early gigs. This was where John Lennon famously encouraged the crowd – namely, Princess Margaret and the Queen Mother, who were in the audience that evening — to ‘“rattle their jewelry” in lieu of applause. The cheeky quip, which was uttered just before performing “Twist and Shout”, launched the concert into pop-culture infamy.

Helpful Hint: The Prince of Wales Theatre is located in the heart of central London, making it in doable walking distance from a variety of notable landmarks throughout the city.

Little did London know in 1963 that the newest group of tenants at 57 Green Street were well on their way to making history. John, Paul, Ringo, and George only lived all together once, and it was at this address. They moved into the flat upon relocating to London from Liverpool, right as their career began to teeter on the precipice of explosion. Take a walk around the Fab Four’s former neighborhood to immerse yourself in one of the last environments where they knew a sense of normalcy, and, of course, to imagine how incredibly cool it would have been to be a fly on the wall in their flat.

Helpful Hint: Bond Street and St. John’s Wood are only two stops away on the Jubilee line, making it easy to visit 57 Green Street and the Abbey Road area in a short amount of time.

Click ahead for more Beatles locales that you can visit…

Walking down Savile Row may seem ordinary now, but 51 years ago, it was filled with music as what would become regarded as one of the most historic concerts of all time took place high above street level. It was at this address where The Beatles climbed to the rooftop to give their final public performance on January 30th, 1969 (that’s right, this is the address of the former Apple Corps location). All you have to do is stop and look up to drink in one of the most paramount moments in music history.

Helpful Hint: The building looks nondescript from the outside, so keep your eye out for a blue circle with white writing in the center. These are known as blue plaques, and they’re used to mark buildings with historical and cultural significance in the UK. In this case, the blue plaque outside 3 Savile Row identifies it as the location of The Beatles’ final public performance.

After paying a visit to where The Beatles took their final bow, a train ride up to Liverpool can bring you right back to where it all began: The Cavern Club. This is the venue where The Beatles performed regularly in their early years and began to cultivate a fanbase. The Cavern Club still regularly showcases live acts (including Beatles tribute acts, of course), so drop in, grab a pint, and immerse yourself in music history.

Cost to Visit: Free excluding cost of transportation. Costs may vary depending on if you choose to purchase drinks and/or tickets to a gig.

Helpful Hint: The Cavern Club website contains information regarding multiple types of Beatles tours, so if you’re keen to get out and about and further immerse yourself in Beatles culture while in Liverpool, The Cavern Club could be a starting point for exploring some of your options.

The Grapes, photo by Geoff Davies

With The Cavern Club just a short distance away, The Beatles were known to frequently drop in at this pub — so often, in fact, that they now have their own commemorative booth. Don’t worry, you’ll find it: it’s clearly marked as “The Beatles Sat Here” (with a photo to prove it). Visitors often queue to take photos in the booth, so while you may not be able to sit there for long, you’ll still be able to say that you sipped a pint where the The Beatles once did — and that definitely counts for something.

Cost to Visit: Free excluding cost of transportation. Prices may vary depending on food or drinks purchased.

Helpful Hint: As you can probably imagine, The Grapes tends to get pretty busy around peak hours — and especially so on weekends. If you’d rather avoid a crowd, consider visiting a little earlier in the day.

“Penny Lane” may have only ever been in your ears, but it can be in your eyes once you take a walk down the street that inspired the 1967 hit single. Located near the childhood homes of both John Lennon and Paul McCartney, the area offers an intimate look at the life of The Beatles pre-fame. Given that the Penny Lane area is removed from the hubbub of central Liverpool, it is wonderfully easy to lose oneself in the world of the song — especially since some of the locations mentioned in the track, such as the barber shop, actually exist.

Address: Greenbank Road, Liverpool L18 1HQ (this is the address of one of the Penny Lane signs that can act as a starting point for your visit)

Helpful Hint: The Penny Lane road signs are stationed alongside the sidewalk, so rest assured that you’ll be able to safely take photos without having to be concerned about oncoming traffic.

Alongside Penny Lane, exploring Strawberry Field is another opportunity to see a song come to life. In addition to a visitor exhibit, gardens, and a café, Strawberry Field is also home to a professional development program for young people. The latter is an extension of its origins as a Salvation Army children’s home, where a pre-Beatles John Lennon would often come to perform and spend his time.

Cost to Visit: Adult tickets are £12.50; student, senior, and children ages 5-16 tickets are £8.00; tickets for families of two adults and three children are £35.00 collectively; and tickets for children under the age of five, seniors, drivers, leaders, and carers are free.

Helpful Hint: Strawberry Field has its own minibus system that transports visitors from Liverpool’s city centre to the venue and back. Tickets are £7 and must be booked in advance.