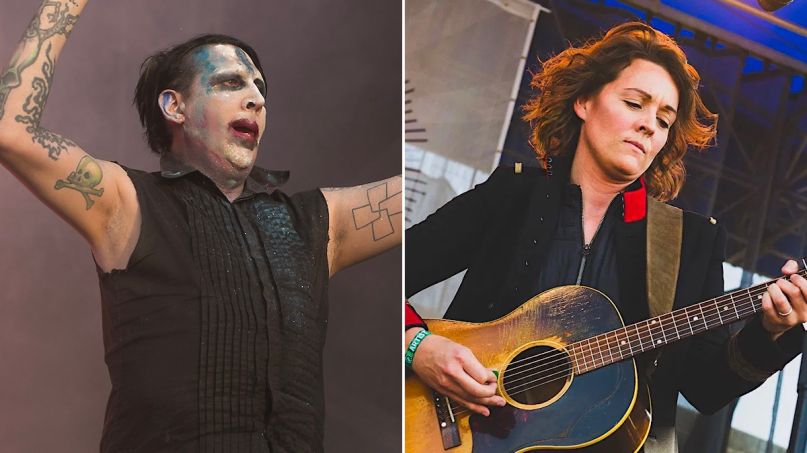 Marilyn Manson is a big fan of Brandi Carlile, so much so that the Antichrist Superstar wants to duet with the alt-country singer on the Wizard of Oz classic “Somewhere Over the Rainbow”.

Carlile revealed the tidbit during a new interview with host Zane Lowe on his Apple Music program, remarking, “Marilyn Manson wants to record ‘Somewhere Over the Rainbow’ with me. He’s been texting me about it.”

When Lowe responded, “Do that!”, Carlile answered, “Okay, I will.” She also added, “[Manson] came to my Joni Mitchell Blue show. I did a show where I did all of Blue by Joni Mitchell at Disney Hall in LA. He came, and he cried so hard. He had all his makeup down his face, and turns out he’s the biggest Joni Mitchell fan on the face of the planet.”

The original version of “Somewhere Over the Rainbow’ was sung by Judy Garland, who played Dorothy in The Wizard of Oz. Regarding the late singer-actress, Carlile said, “Judy Garland just makes me smile. Just to me, she’s everything gay. Just everything. When I listen to ‘Somewhere Over the Rainbow’, I feel happy but I don’t feel happy in contrast or contrary to the way I’m naturally feeling. I just feel like I can maybe have a daydream.”

Elsewhere in the interview, Carlile also talked about a series of monthly jam sessions she’s been having at Joni Mitchell’s house, being mentored by Sheryl Crow, and her love of Alabama Shakes singer Brittany Howard, among other topics. Highlights can be seen below, with the whole interview available at Apple Music.

As for Manson, he recently informed fans that his new album is finished, agreeing with producer Shooter Jennings that it’s a “masterpiece.” No word yet on a release date.