Revealed during a laundry room livestream concert on Monday 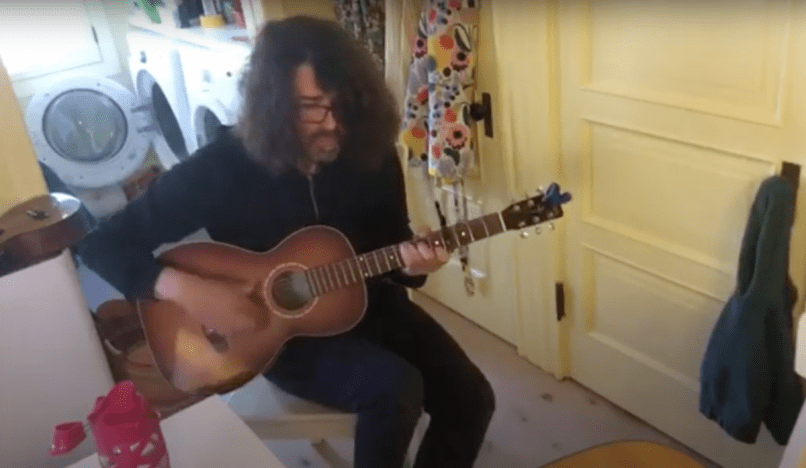 Late last year, bassist Lou Barlow revealed that Dinosaur Jr. were in the studio recording their next record. Now, relishing his role as the official Dino-leaker, Barlow has announced that the album is finished and mixed. What’s more, he’s premiered a new, currently untitled song.

The news came from Barlow’s laundry room during a lockdown livestream performance on Monday. “We just finished mixing the Dinosaur Jr. record. Of course we did it remotely,” he said, adding that John Agnello had done the work alone in his North Carolina studio. “I have two songs that I contributed. I had three but I couldn’t finish the third one because of…” He gave a shrug that took in the general state of the world. “This. There’s been a lot of cancelled Dinosaur Jr. stuff, too, but we have a record so we have something to offer this year.”

He played one of those two contributions during the livestream, although he didn’t reveal the song’s name. At least in its current, acoustic form, the cut is lovely and introspective. Lyrically, it seems to be about holding on to an important relationship in times of great stress. He sings, “Now that it’s started/ It might not stop/ The pressure drops/ Back to the garden/ Look in my eyes/ We’ll survive.”

Watch Barlow perform the song and discuss the new Dinosaur Jr. LP below, and keep scrolling for the full hour-long livestream.

The new record will be the band’s first since 2016’s Give a Glimpse of What Yer Not. Last year, Barlow’s side project Sebadoh shared their latest full-length, Act Surprised, while Dinosaur Jr.’s J Mascis released his solo effort Elastic Days.