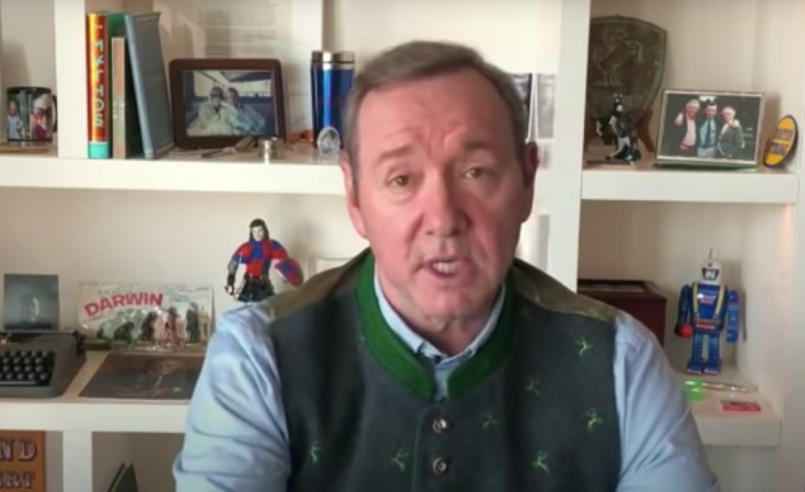 Since the first allegation in 2017, Kevin Spacey has been accused by dozens of people of unwanted harassment, groping, assault, and pedophilia. He lost his job on House of Cards and his career as an A-list actor — but then, as he revoltingly points out in a recent video, haven’t so many of us lost employment in these troubled times?  If you have been fired or furloughed during the coronavirus pandemic, Kevin Spacey claims to feels your pain — for is that really so different than being outed as a serial sexual predator? (We thought this would go without saying but yes, actually, fuck yes those things are different!)

For reasons unknown, the German start-up conference Bits & Pretzels invited Spacey to give a virtual speech at the beginning of April. Spacey’s homemade video briefly dropped into the void, but has since resurfaced, traveling around the internet and leaving a slime trail in its wake. After thanking Bits & Pretzels for the invitation, the disgraced actor was heard saying, “I will do my best to share some of my perspective on what it feels like to suddenly find yourself in a situation you could not possibly have prepared for or anticipated was coming.” Try not to roll your eyes too hard, because we’re early in the ten minute speech, and if you start now you might pull a muscle by the end.

While Spacey did say that he doesn’t “like to tell people I can relate to their experience, because it undermines the experience that they may be having,” he followed up those words by suggesting that, actually, the COVID-19 crisis and decades of preying on young boys are so similar that he can’t resist. “In this instance, I feel as though I can relate to what it feels like to have your world suddenly stop.”

What followed was another clumsy stab at empathy, followed by further self-justification. Spacey burbled on,

“And so while we may have found ourselves in similar situations, albeit for very different reasons, I still feel that some of the emotional struggles are very much the same. And so I do have empathy for what it feels like to suddenly be told that you can’t go back to work, or that you might lose your job, and it’s a situation that you have absolutely no control over.”

There’s more — ye Gods, there’s so much more — including lofty comparisons between actors and entrepreneurs who “think the impossible is possible,” and an ode to “the resilience it takes to keep going in the face of a lot of people who want to remind us that we’re going down the wrong road.” And indeed, from the many harrowing stories told about Spacey, he put a lot of effort into overcoming a lack of consent.

There’s a car analogy about great men who keep driving and forget to check the engine light, and a pity party about a poor man who didn’t know what to do with himself, because “all I ever wanted to do was act.” What there is not is a single moment of self-reflection. There’s no acknowledgment of the people he hurt, and zero evidence of growth. If you’d like to see an unrepentant narcissist in action, check out the video below.

Over the last year, not one but two of Kevin Spacey’s accusers have died, and while it might be a murderous conspiracy straight out of House of Cards, it might also just be a coincidence made possible by the sheer number of victims. In December, the actor reached a settlement with one of his late accusers’ sons.

In lieu of acting roles, Kevin Spacey has taken to releasing bizarre Christmas videos, first in 2018 and again last year.