She compares her character's look to that of "a battered, mangy old cat" 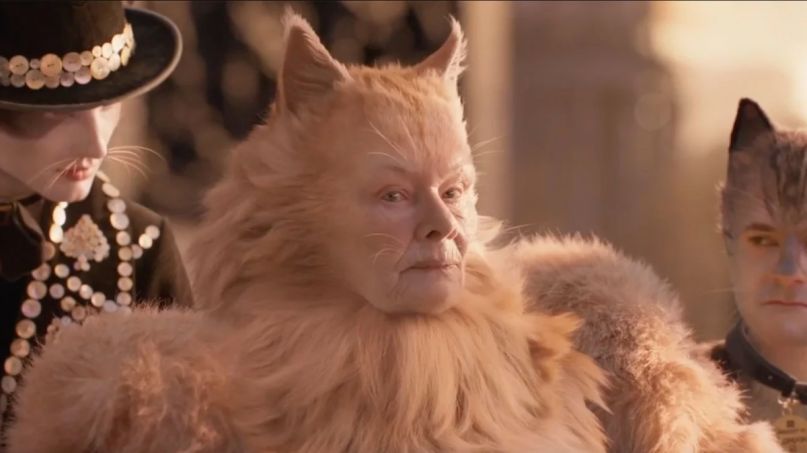 Everyone from film critics to Universal Studios was disappointed in Tom Hooper’s adaptation of Cats. As it turns out, the film’s cast was also let down. In a new British Vogue cover story, Judi Dench went on the record to say she was appalled by the film’s CGI, equating her character’s look to that of “a battered, mangy old cat.”

Dench had a lot to say about the movie, especially for someone who still hasn’t seen it, notes IndieWire. The 85-year-old actress filmed her parts in green screen while her eyesight was impaired. Afterwards, she was shown photographs and film stills of her character, Old Deuteronomy. “The cloak I was made to wear!” she exclaimed. “Like five foxes fucking on my back.”

Instead of looking elegant or refined, Dench said she wound up looking like “a great big orange bruiser,” adding, “What’s that about?” Honestly, that’s a good question. The CGI in Cats looked creepy in its first and second trailers, and the creative team scrambled to fix it up until the very last minute — going so far as to mail new visual effects to theaters after the movie had begun screening, in part because Dench’s human hand was untouched in scenes.

When the interviewer told Dench that Cats is already a cult favorite for irony-loving audiences, she nodded. “I had a very nice email — no, not an email, a text — from Ben Whishaw [the actor], who just doted on it,” she said. “So sweet. So lovely.”

Objectively speaking, Cats is a failure. The reimagining of Andrew Lloyd Weber’s classic Broadway show bombed at the box office with a $6.5 million opening weekend. Since then, it’s been estimated to lose up to $100 million despite an all-star cast of Taylor Swift, Judi Dench, Ian McKellen, Idris Elba, Jennifer Hudson, Jason Derulo, Rebel Wilson, James Corden, and Grumpy Cat herself.

While the Visual Effects Society blames Cats for ruining their Oscars Category, others are embracing the film in all of its cat-astrophic glory. Most notably, Seth Rogan has called on Universal to embrace their mistake by releasing the “butthole cut” of Cats. That may be downright scarring, though.