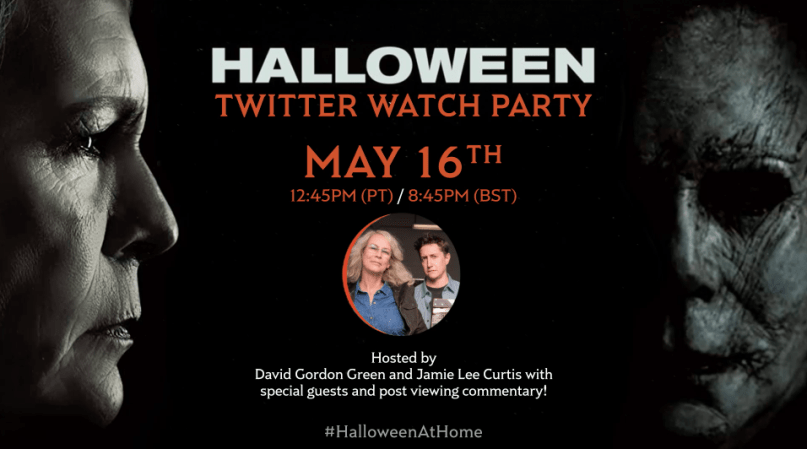 Jamie Lee Curtis is back on her live-watch game. Today, Universal announced it will be taking over weekends with a series of Twitter watch parties, and Laurie Strode herself will kick things off this Saturday, May 16th with 2018’s Halloween.

Sadly, Dr. Sartain will not be joining them.

The rest of the month will see watch parties for Apollo 13, hosted by former NASA Astronaut Scott Kelly, in addition to The Breakfast Club, hosted by everyone’s favorite site founded by Chris Hardwick: Nerdist. Radical.

In order to join, simply follow the hosts on Twitter, buy or rent the weekend’s movie at any retailer, and then press play at exactly 4 p.m. EST / 1 p.m. PST. A press release notes there will be a pre-show 15 minutes prior.

Below, you can consult the full schedule. Don’t forget, we have our own watch-parties on Saturdays via Consequence of Sound’s Twitch channel. This weekend, our Halloweenies will be doing a live-watch of Friday the 13th Part 3.

No one does horror quite like Blumhouse and Michael Myers. Join the production company that specializes in horror as they watch the return of Halloween alongside the film’s director David Gordon Green, Jamie Lee Curtis and special guests including: John Carpenter, Jason Blum, Judy Greer, James Jude Courtney and Nick Castle. Jamie Lee Curtis returns to her iconic role as Laurie Strode, who comes to her final confrontation with Michael Myers, the masked figure who has haunted her since she narrowly escaped his killing spree on Halloween night four decades ago. Halloween is presented by Universal Pictures, Miramax, Blumhouse Productions and Trancas International Films. #HalloweenAtHome

A look at space with someone who has actually been! Join retired NASA Astronaut Scott Kelly, a veteran of four different space flights, as he watches his predecessors try to return back to Earth. Stranded 205,000 miles from Earth in a crippled spacecraft, astronauts Jim Lovell (Tom Hanks), Fred Haise (Bill Paxton) and Jack Swigert (Kevin Bacon) fight a desperate battle to survive. Meanwhile, at Mission Control, astronaut Ken Mattingly (Gary Sinise), flight director Gene Kranz (Ed Harris) and a heroic ground crew race against time – and the odds – to bring them home. #Apollo13AtHome

May 30th – The Breakfast Club hosted by Nerdist

Please report for Saturday detention at the library! Join Nerdist as they revisit the misfits of the John Hughes 80’s classic The Breakfast Club. They were five students with nothing in common, faced with spending a Saturday detention together in their high school library. At 7 a.m., they had nothing to say, but by 4 p.m. they had bared their souls to each other and become good friends. To the outside world they were simply the Jock, the Brain, the Criminal, the Princess and the Kook, but to each other, they would always be The Breakfast Club. #BreakfastClubAtHome