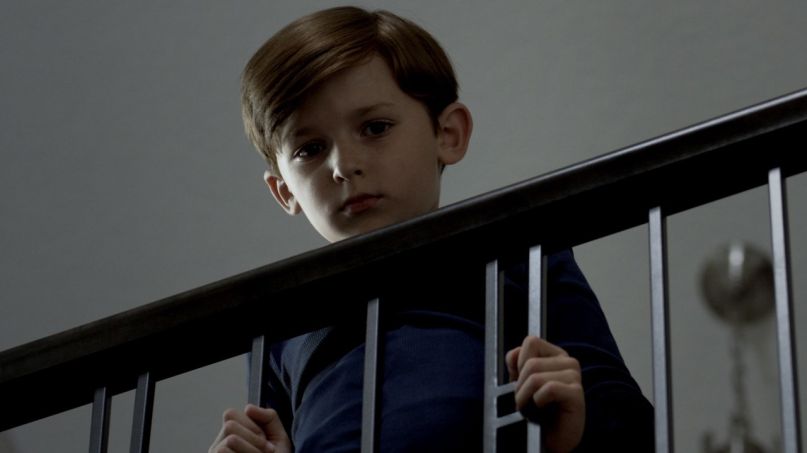 Spelling It Out: Parents Kevin (Sean Rogerson) and Beth Parsons (Keegan Connor Tracy) notice their eight-year-old son, Josh (Jett Klyne), has begun to play with a mysterious imaginary friend he calls Z. What at first seems like a childish phase quickly becomes destructive and dangerous. As Z causes chaos in Josh’s life and those of his friends and family, we learn that Z may have more sinister origins and desires.

Real-Life Parent Horror: While the titular monster is the main source of horror, director-writer Brandon Christensen’s Z features prime examples of everyday parental nightmares. Josh doesn’t seem to have many friends and he’s not doing well in school. Parents will connect with the pain of worrying that their child is an outcast and struggling to know how to intervene.

Particularly heartbreaking is a scene in which Beth calls the parents of Josh’s classmates trying to find a play date for him only to be turned away over and over again. Z begins with these familiar struggles but quickly ups the ante to expulsion, ugly rumors, and violence. A disastrous play date ends with one of the most upsetting scenes of the film, alluding to another parental fear: “What if my child is the villain?” Before we really get a feel for who or what Z is, we are thrust into some of the most stressful parenting situations imaginable.

Not helping matters is the fact that Beth and Kevin’s abysmal communication is toxic and destructive. He doesn’t take her concerns seriously, even seeming to mock her in one particularly cruel scene that all but justifies his fate. And they both hide significant information from each other regarding Josh’s care. We never get a sense that the Parsons family is on stable ground, leaving us with no anchor when the story begins to escalate.

Now You Z Me, Now You Don’t: Z’s creature design proves that less is more by revealing its monster gradually and sparingly. Beginning with a pair of illuminated eyes in a dark closet (something we’ve all imagined at one point), the tension gradually ramps up with a sequence of events that become more and more difficult to explain away. We see very little of Z, only appearing in flashes several times in the story (just enough for him to get under our skin), but we feel his presence throughout the story. Josh draws an upsetting mural of Z on his bedroom wall — a design reminiscent of a troll living under the Babadook Bridge.

Mural and creature combine in one of the creepiest segments of the film, aided by another trick used to great effect: light-up toys operating on their own. A vintage talking alphabet toy provides unsettling messages and uncomfortably reminds this writer of the time she walked into a dark playroom and accidentally triggered a state capitals map to repeat the word Salem over and over again. But Z is subtle with its design and uses these gimmicks effectively. The presence of the monster can be felt in opening doors, red glowing eyes, extinguished candles, and off-camera sounds, maintaining the mystery and making the moments we do see him particularly scary.

Performances: Jett Klyne plays young Josh with an uncanny ability to walk the knife’s edge between cute and creepy. A scene where Beth finds him innocently reenacting a horrific accident with his toys then, when he realizes she is watching, asks her to play evokes chills in the way only kids can. When viewed through a naive lens, this could be seen as cute and even sweet, but in the context of the film’s events, it’s terrifying. And Klyne actually seems like an eight-year-old, small and fragile at times, but deftly shifts to deviously mischievous, a dichotomy that allows us to both fear him and fear for him.

The adults’ performances are fine, but never seem to elevate the material the way Klyne’s does. Standouts are Sara Canning as Beth’s sister, Jenna, and Stephen McHattie as Josh’s therapist, Dr Seager. Unfortunately, McHattie is not given much to do here, and his performance mostly serves in reminding us that we should rewatch Pontypool or Seinfeld later.

Nice Day for a Weird Wedding: While the plot goes off the rails a bit in the third act, Z is presented throughout in a vaguely sexual way. Always naked, he seems to appear in suggestive yet creepily innocent positions such as crawling closely behind Josh in a playground tube, hopping into the bathtub with Beth, and creepily climbing into bed with her in a scene smartly left under the covers. The implication of sexuality is there, but framed through the reference point of a curious child who stumbles upon a stack of Playboys. The third act also includes a forced wedding and uncomfortable parallels to abusive relationships that veer between creepy and icky. While this could have been an interesting narrative element, it mostly falls flat because the film doesn’t seem to know what to do with these sinister implications.

Sometimes Less Is Actually Less: Where less was more in creature design, the sparse plot that never seems to come together proves that sometimes less actually is less. While resisting the temptation to overcomplicate the story, Z feels like a film where several key scenes were accidentally deleted. There are seeds of an unhealthy dynamic in Beth’s family that never feel fully fleshed out or impactful to the story. The abusive marriage undercurrent mentioned above is hinted at, but never explored. Most frustrating is the climactic ending when a character provides a resolution that makes no sense with what we’ve been told. While effectively tense, it feels overly simplistic and uncomfortably borders on victim blaming.

Stephen McHattie’s therapist character is given so little to do that his almost immediate belief in this Z seems suspicious, and his resolving advice feels ridiculous. If this story (and that of Beth’s family) had been given more weight, the film’s conclusion would likely land with a more devastating thud. Instead, we’re left with frustrating questions and a wholly unnecessary final scene. And with an 86-minute run time and solid actors, it’s hard to understand the reasoning behind not doing so. We don’t need every minute detail, but we do need enough to understand in order to care.

The Verdict: Z provides effective scares and at least one moment that made this parent scream in horror. It’s doing so many of the right things, but like a puzzle with a few pieces missing, it’s hard to see the full picture. However, it’s likely Z will be haunting the dreams of many viewers and encouraging second checks of many closets before bedtime.