Taken from the upcoming album In the Beginning, the band's first LP in 20 years 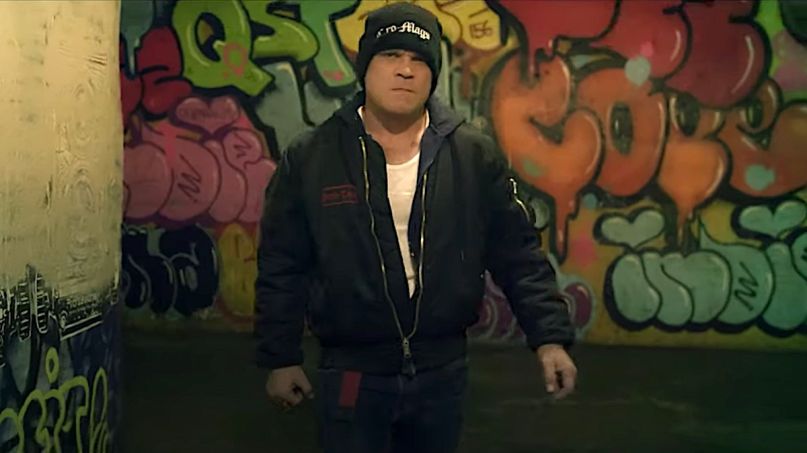 Harley Flanagan in Cro-Mags' From the Grave video

Several months after premiering the track right here at Heavy Consequence, hardcore veterans Cro-Mags have unveiled the music video for “From the Grave”. The song features a guest spot from Motörhead guitarist Phil Campbell, who also appears in the video.

The video stars Cro-Mags founder Harley Flanagan as he makes his way from a cemetery in The Bronx through the streets, subway stations, and alleyways of New York City.

“The idea for the video is that I’m rising from the grave and going on a mission… like I came back from the dead to become the Grim Reaper himself,” stated Flanagan in a press release. “I think anybody who knows the history of this band and of my life will get it. It starts off at Woodlawn Cemetery in the Bronx, where I will be buried with my family and in-laws. In the opening shot, the grave I’m in front of is actually my mother’s.”

Campbell appears in separate footage, playing guitar throughout the song, including a pretty killer solo toward the end of the track.

“Phil is one of my favorite guitarists of all time and I still can’t believe I have him playing on one of my songs,” said Flanagan. “I am so honored. The footage of Phil was shot by his son Todd Campbell at his recording studio in Wales, UK.”

“From the Grave” appears on Cro-Mags’ first album in 20 years, In the Beginning, which arrives on June 19th. The LP is available for pre-order at Amazon or in various bundle packages from Mission Two Entertainment. The album also marks the band’s first full-length effort since Flanagan won the legal rights to the Cro-Mags name, leaving former bandmates John Joseph and Mackie Jayson to perform under the name Cro-Mags JM.

Watch the video for “From the Grave” below.