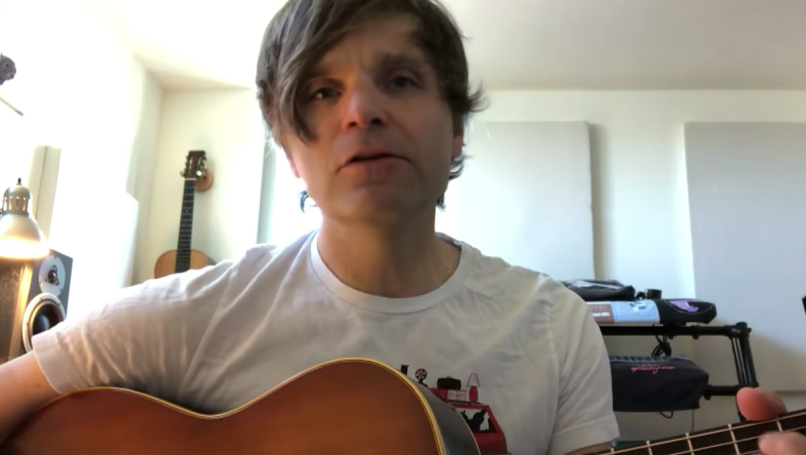 Ben Gobbard on A Late Show with Stephen Colbert

If you put aside the disparities that always exist between societal strata and the political nonsense surrounding the health crisis, there’s something equalizing about the pandemic. Late night TV has provided somewhat a reflection of this, as the increasing delirium of hosts like Stephen Colbert mirrors our own stir-craziness, and guests have been reduced to the same Zoom calls in which everyone else is partaking. Take, for example, Ben Gibbard’s performance of “Life Under Quarantine” on A Late Show Wednesday night.

The Death Cab for Cutie frontman debuted the new song back in March during a livestream for Seattle news outlet The Stranger’s “A Message to the City” series. Back then, he delivered the sad, strumming musing on our current trying situation while sitting squarely in front of his computer camera, playing his acoustic guitar and singing beautifully. On Colbert, he did the same exact thing — he just turned so there was a different backdrop and sounded like he had an inproved mic setup.

Don’t get it wrong, Gibbard’s performance of “Life Under Quarantine” was as lovely as could be. Still, the immediate similarity between the Colbert appearance and the song’s debut makes for a striking emphasis of the lyric’s theme and the repetitious nature of life in lockdown. “No one’s going anywhere soon” indeed.

Watch the replay below, and revisit Gibbard playing “Life Under Quarantine” for the first time here. A “studio” version of the track was also released to benefit Seattle-area relief organizations, including homelessness-support services non-profit Aurora Commons.

You can also rewatch a number of Gibbard’s lockdown livestreams, during which he’s covered Elliott Smith, Phoebe Bridgers, and The Shins; sang Radiohead’s “Fake Plastic Trees”; paid tribute to Fountains of Wayne’s Adam Schlesinger with a rendition of “Barbara H”; and turned in an all-Beatles cover set.