Though never collaborators, the two camps shared a mutual respect and conceptual cunning 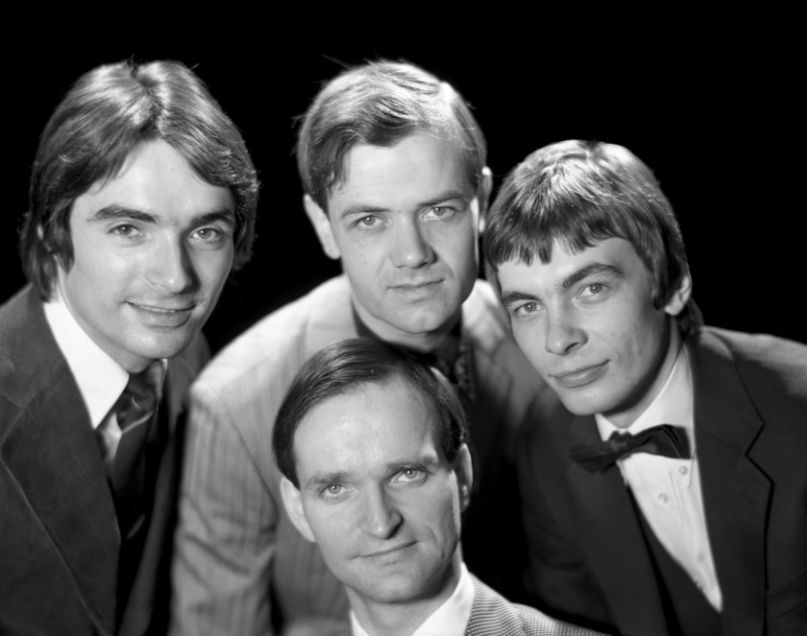 In 1976, David Bowie introduced his bravest new world yet. Zig-zagging across Europe and North America to promote his 10th studio album, Station to Station, he set the scene, night after night, with spliced footage from Luis Buñuel and Salvador Dalí’s surrealist masterpiece Un Chien Andalou. It was a strange yet enthralling scene for fans, but had the artist, then known as The Thin White Duke, had his way, four motionless Germans would have graced the stage instead. The request, of course, was made, but a firm yet friendly “nein danke” from Kraftwerk later led musical history to opt for another course.

Midway through the Station to Station live run, also known as the “Isolar Tour”, Kraftwerk co-founders Ralf Hütter and Florian Schneider met with Bowie at their Kling Klang Studio in their home city of Düsseldorf. With the latter having reportedly traveled to the studio in a Mercedes with Autobahn playing on loop, a collaboration between Bowie and Kraftwerk was reportedly spoken of, but it never came to pass. How seriously either party entertained the idea of a creative union is still a matter of conjecture, but this tale is just one arc in the mottled and many-layered thing that was Bowie’s relationship with the West German electronic vanguards over the years.

Kraftwerk’s pass to open for Bowie on the “Isolar Tour” didn’t dishearten the artist, who often referred to himself as the “protagonist” in relation to how his career played out. In fact, with “Heroes” peak “V-2 Schneider” doubling up as a crystal-clear nod to founding Kraftwerk member Florian Schneider a year later, his love of the German trailblazers was still on full display. Bowie must have known Kraftwerk’s veto couldn’t have been further from a slight. After all, the fierce autonomy that defined the group was what Kraftwerk member Wolfgang Flür referred to as their essential “self-referential” nature.

While the otherworldliness of both acts was on-par, Kraftwerk were clearly at their truest when operating alone. Besides, any lingering suspicion of enmity was put to bed in 1977, when the title track from Trans-Europe Express conjured the rendezvous the year before: “From station to station back to Düsseldorf city/ Meet Iggy Pop and David Bowie.”

Trading the sun-split environs of LA for West Berlin at the tail-end of 1976, Bowie’s attention had, he would later reveal, “been swung back to Europe with the release of Kraftwerk’s Autobahn in 1974.” When Nicolas Roeg cast Bowie as the extraterrestrial Thomas Jerome Newton in The Man Who Fell to Earth earlier in 1976, it was confirmation that the shape-shifting artist was, if not alien, borderline post-human. Having dismantled himself, over and over, Bowie — not Ziggy Stardust nor The Thin White Duke — bolted towards the 1980s a world-beating debaser of “The Big I Am.”

Before the Berlin Trilogy of Low, Heroes, and Lodger doubly underscored Bowie’s heady metamorphosis, it was at Cherokee Studios in Hollywood where he truly set the wheels in motion. While keeping faithful to the soul and slinking strut of Young Americans, Station to Station has stood the test of time by how it incorporated the promise of the new within a familiar sphere. Seconds in, the repetitive pulse and swirling, widescreen whooshes of the opening title track felt like a siren song of pure-cut reinvention.

Ziggy undone, the probing experimentalism of Station to Station heralded the Berlin Trilogy by proposing an MO that valued unlearning and stepping into the unknown. While the “European canon” Bowie sings of in the title track was an overture to embracing a system reboot, the refrain of “Transition, transmission” on “TVC15” felt less like Bowie and Iggy’s fever-dream paean to a holographic television and more of a searing searchlight shone directly on the future. Sure, the boogie-woogie stomp still took centre-stage, but its marriage with strange electronics felt like a knowing and ecstatic salutation to what came before.

If Bowie fared autonomous in the mid-to-late 1970s, Kraftwerk operated on another sovereign plane altogether. Singular pioneers of synthetic sound — of forging soundworlds with negligible link or debt to modern music — they ushered in an era that defied the past and made manifest the future. Released in the same year as Bowie’s glam triumph Diamond Dogs, Autobahn was a revolutionary quantum leap for recorded electronic sound, dreamt up with Conny Plank in his eponymous Cologne studio. Four years on from forming, Kraftwerk, wielding homemade synth machines and oblique vocoder refrains, had seemingly unique access to subverting the accepted milieu of rock and blues music. If Bowie sourced his power by dismantling “David Bowie” and putting it back together again, complete detachment from the status quo was Kraftwerk’s modus operandi.

Speaking to Mojo in 2005, Ralf Hütter spoke of how much he valued Bowie’s clear love of his group. “That was very important for us, because it linked what we were doing with the rock mainstream,” Hütter said. “Bowie used to tell everyone that we were his favourite group, and in the mid-’70s the rock press used to hang on every word from his mouth.”

Likewise, just as, say, Nirvana could not exist without Melvins, or how Sonic Youth are inextricable from their early work with Glenn Branca, Bowie wasn’t slow to acknowledge the imprint of Kraftwerk on his trajectory. But he made sure to spell out the important disparity between sonic and conceptual influence. “What I was passionate about in relation to Kraftwerk was their singular determination to stand apart from stereotypical American chord sequences and their wholehearted embrace of a European sensibility displayed through their music,” Bowie said. “This was their very important influence on me.”

For Bowie, the dehumanised, future sounds of Kraftwerk made their mark, but the influence went beyond songwriting. It was the currency of the idea, not the substance that those ideas took shape, that held sway. In other words, Kraftwerk were the automatons of what Bowie was doing on defiantly human terms. Where Kraftwerk prioritized rigor and control, Bowie embraced chance and spontaneity. While Hütter, Schneider and co. personified the systematic, Bowie commandeered pure expressionism.

While the story can’t be told without Conny Plank, Iggy, Brian Eno, Michael Rother et al., the Venn diagram of Bowie, Kraftwerk and the mind-bending realms they created was, among other things, a rejection of the bland meritocracy of the ’70s. Whether machine-like or brazenly human, subversion and authenticity reigned supreme. Though fiercely devolved entities, Bowie and Kraftwerk both dreamt up the death of one-dimensional rock ‘n’ roll in favour of something much less guessable. On overtures to the limitlessness of human endeavor such as “Heroes” or “The Robots,” they forged a pathway for the future (read: present) of music to play out, limitless, and free.

A few myths about Bowie and Kraftwerk’s non-working relationship have been proliferated over the years, but one fact remains clear: modern pop may not have begun with Bowie and Kraftwerk, but its chrysalis from a plumule of possibility into full-blown, real-world futurism is what set them apart. Operating on separate axes on the same plane, they veered off into the great unknown, laws unto themselves.

With the passing of Florian Schneider at 73 bookending a sizable part of the Kraftwerk story, one can’t help but think back to those packed arenas of 1976. As the crowds flocked in to see The Thin White Duke, beset by images of sliced-up eyeballs and dead donkeys, songs from Kraftwerk’s Radio-Activity poured out from the PA. It may not have been the real thing, but by having this otherly music set the scene, Bowie made sure his fans knew there were others who, in their own way, also inhabited the future.