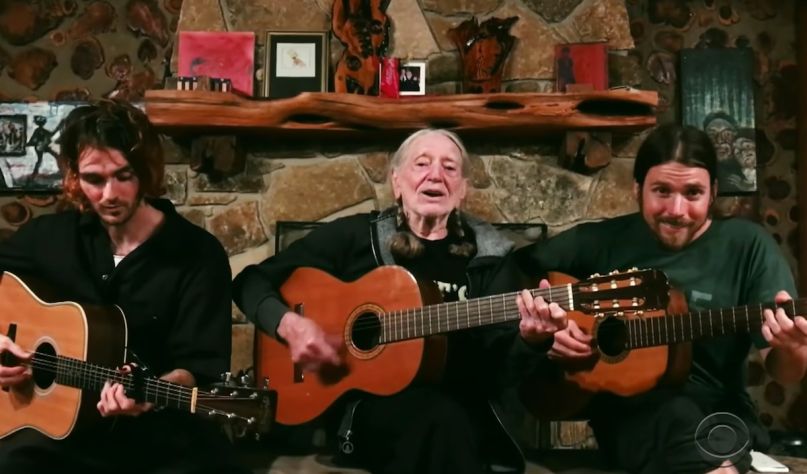 Willie Nelson and sons Lukas and Micah on Colbert

Not surprisingly, cannabis connoisseur Willie Nelson planned a number of festivities to celebrate 4/20 on Monday. The music legend held a huge livestream event called “Come and Toke It” featuring appearances from the likes of Kacey Musgraves and Angel Olsen. Later in the evening, however, Nelson scaled things back for a more intimate, family affair-style performance on the Late Show with Stephen Colbert.

Recorded remotely from the Nelson household, the appearance featured Willie strumming alongside sons Lukas and Micah. The three ran through “Hello Walls”, a 1961 song Willie wrote for Country Music Hall of Famer Faron Young. It was a pleasant and hearty rendition, and a fine way to close out Willie’s favorite holiday.

Watch the Colbert performance below.

This summer, Willie will release his 70th record, First Rose of Spring. He’s also due to hit the road for a string of US tour dates, a handful of which are part of Chris Stapleton’s “All-American Road Show” tour. Snag concert tickets here.

Willie’s Red Headed Stranger was the focus of a recent season of The Opus, and you can revisit the first episode below. Further episodes can be streamed here.