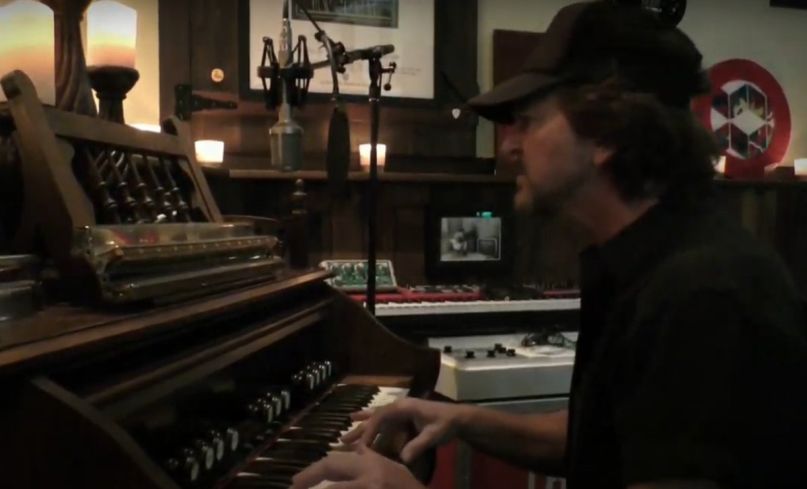 Eddie Vedder plays at One World: Together At Home Concert
view all
Next

“One World: Together At Home Concert”, a global special curated in collaboration with Lady Gaga, aired on Saturday night in celebration and support of health care workers and the COVID-19 Solidarity Response Fund for the World Health Organization (WHO). The two-hour telecast was broadcast simultaneously on ABC, NBC, and CBS, and also streamed online. Below, you can watch highlights from the concert.

Pearl Jam frontman Eddie Vedder played “River Cross”, a song from the band’s new album Gigaton. And he did so on an organ! Yes, Eddie Vedder has an organ in his house!

Playing from their respective homes, The Rolling Stones’ Mick Jagger, Keith Richards, Ronnie Wood, and Charlie Watts rolled through a rollicking rendition of “You Can’t Always Get What You Want”.

🤘 If you start us up, we’ll never stop fighting for global health. Take action with The @RollingStones: https://t.co/26xVXSb0qy #TogetherAtHome pic.twitter.com/Dpze2tNyCW

For her part, Gaga performed Charlie Chaplin’s “Smile” on keyboard. Her poignant cover included lyrics like, “Smile, though your heart is aching/ Smile even though it’s breaking/ When there are clouds in the sky/ You’ll get by.”

Later in the evening, Lady Gaga teamed up with Celine Dion, Andrea Bocelli, and Lang Lang to perform “The Prayer”.

The world deserves this level of combined brilliance! 🥺🔥#TogetherAtHome #GlobalCitizenspic.twitter.com/OwPJzGPMQU

Stevie Wonder just paid tribute to his friend Bill Withers by performing "Lean of Me” at the #TogetherAtHome concert.

It’s amazing, and couldn’t be more perfect for this moment.

Sir Paul McCartney paid tribute to the doctors and nurses on the frontlines of COVID-19 by performing a stripped-down version of The Beatles’ “Lady Madonna”. McCartney also gave a shout out to his mother Mary, who was a midwife and nurse during WW2.

Playing from a grand piano situated underneath his kids’ basketball hoop, Sir Elton John offered up a rendition of “I’m Still Standing”.

Heroes on the frontlines, this song is for you ❤️ Join @Eltonofficial in thanking frontline workers for protecting our communities during the pandemic. Do your part to help stop the spread of COVID-19 at https://t.co/26xVXSb0qy. #TogetherAtHome pic.twitter.com/WeClpDwwWs

Billie Joe Armstrong Performs “Wake Me Up When September Ends”

Green Day’s Billie Joe Armstrong brought Lady Gaga to tears with a moving rendition of “Wake Me Up When September Ends”.

Head to the next page to see performances from Taylor Swift, Camila Cabello, Kacey Musgraves, Lizzo, and more…