TV Review: Amazon’s Upload Is a Droll Exploration of the Corporate Afterlife 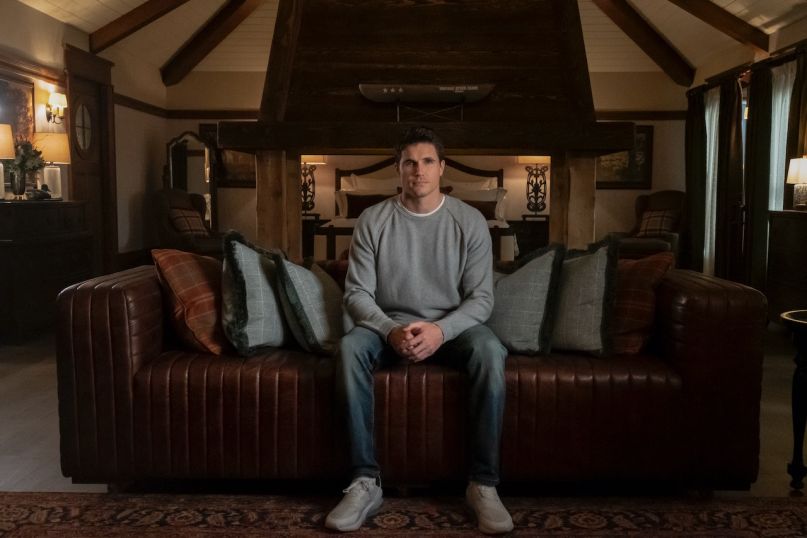 The Pitch: Thirteen years from now, in a tech-forward future of corporate conglomerates and smartphones built into your hand, companies have cracked the code to immortality: uploading people’s consciousnesses at the moment of death to a simulated afterlife where you can live out the rest of your days… provided you can pay. Enter Nathan (Robbie Amell), your average American everyman — devilishly handsome (his past as a catalog model is frequently mentioned), in a relationship with a wealthy, gorgeous heiress named Ingrid (Allegra Edwards), and a master coder on the verge of a groundbreaking product launch. But his time is cut short when his self-driving car leaves him fatally wounded, and he’s pressured into ‘uploading’ to Lakeview, the five-star paradise Ingrid’s rich family has a contract with.

Adrift in Lakeview’s Americana-resort-meets-free-to-play-app existence, Nathan struggles to make the best of his new life after death. Luckily, there’s help in the form of Nora (Andy Allo), his working-class “Angel” who exists somewhere between spiritual guide and tech support. She’s got her own problems, from struggling to keep her soul-crushing job to an ailing father (Chris Williams) who refuses to upload so he can reunite with his wife in “real” Heaven. Together, they might just find the connection they’re both looking for… and maybe even solve the mystery of the circumstances surrounding Nathan’s untimely death.

There’s An Afterlife For That: If the premise of Greg Daniels’ (The Office, Parks and Recreation) latest series for Amazon Prime Video sounds like “San Junipero” meets The Good Place, well, that’s because it pretty much is. Where Michael Schur’s sitcom treatise on the afterlife mires itself much more in philosophy and virtue ethics, however, Upload uses its simulated afterlife to probe questions about the way capitalism keeps our livelihoods dependent on the often-arbitrary pursuit of wealth.

Lakeview is great, but only for those who can pay. Nathan’s presence there is only due to the largesse of Ingrid’s cold family, and you only get the basics for free. The minibar stocks any food you might want, but anything fancy requires a microtransaction. Run out of money, and you become a “2-Gig,” who has to subsist on Lean Cuisine test meals and the first five pages of any book you might read. Go totally broke, and you’re frozen in time until more money goes in your account. It’s a capitalist hell of monetary transactions and a frightful lack of agency, and it’s these moments where Upload‘s downbeat sense of humor leads to some intriguing insights.

Wings of Desire: It’s not all sneering jabs at Big Business, though (and sometimes, those gags get a bit too repetitive; drink every time Daniels and co. mash together two unlikely companies into a larger conglomerate, like Panera-Facebook or Oscar Mayer-Intel). At the center of it all is the unlikely romance between Nathan and Nora, which is sweet enough but plays out a little too predictably. It doesn’t help that they both have a million other story threads to juggle, between Nathan’s interactions with the other residents (like Kevin Bigley’s wacky best friend Luke, or William B. Davis’ slimy Koch-brother analogue) and Nora’s struggles as a corporate drone just trying to avoid too many one-star ratings.

Much more interesting, though, is the show’s portrayal of Ingrid, who starts out as a vapid villain before gaining much more interesting layers as the series goes on. In the beginning, Ingrid and Nathan’s relationship feels like a clear case of financial abuse — he has to stay with her or else she’ll delete him from the program — but later episodes reveal deeper nuances to her family ties and a few heartening glimmers of humanity. It helps that Edwards has impeccable poise and comic timing, and is easily one of the strongest performers on the show.

Paging Mr. Robot: Much like Lakeview’s frame rate when too many users get uploaded at the same time, though, Upload‘s reach occasionally exceeds its grasp. The quirky special effects evoke The Good Place‘s delightfully homespun twists on reality, but the show’s budget often means the effects feel a little more rubbery than intended. What’s more, the IRL investigation of Nathan’s potential murder and cover-up feel somewhat tacked-in to lend the show a bit of mystery, but the execution reads as half-hearted. Fun characters are set up, like Nathan’s oddball cousin Fran (Elizabeth Bowen) who seems set to crack the case wide open, only to drop them unceremoniously. These grander mysteries might lead to some interesting shakeups in future seasons, but right now they’re just getting in the way of the more interesting stuff.

The Verdict: Over the course of its first season, Upload has to do the hard work of setting up an entire fantasy world and a broad ensemble of characters on two different planes of existence, which makes much of these first 10 episodes feel like place-setting. But the show has good bones in an engaging lead, some spirited supporting characters, and a clear eye towards investigating the implications of a world where you can take your money with you when you die, but it’ll only take you so far. It’s not all successful yet, and the overarching techno-thriller subplots aren’t as interesting as the shenanigans in Lakeview, but I’ll take something corny and earnest over wearisome self-seriousness.

Where’s It Playing? Upload offers up high-speed frame rates in the afterlife and endless maple bacon donuts (until 10 am) May 1st on Amazon Prime Video.