TV Review: A Parks and Recreation Special Was Warm, Familiar, and Literally What We Needed

Groundbreaking or not, it felt good to reunite with Leslie Knope and the gang 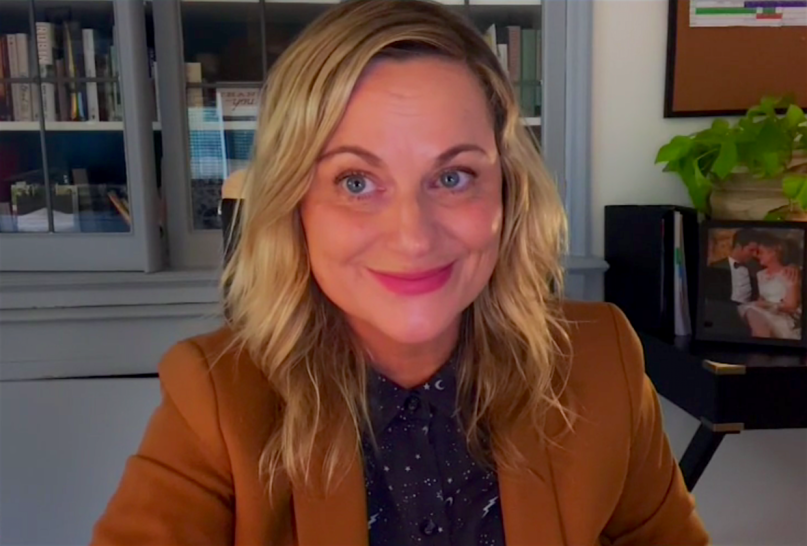 A Parks and Recreation Special (NBC)

The Pitch: Five years after it left the airwaves, Parks and Recreation is back for a scripted reunion special that brings together all your favorite employees of the Pawnee Parks Department during their self-quarantine. Leslie Knope (Amy Poehler) has organized a phone tree with her husband, Ben Wyatt (Adam Scott), and all her old friends to make sure everyone’s okay and maintain her connection to her loved ones while they all have to stay socially distant.

That means pestering Ron Swanson (Nick Offerman) as he retreats to his cabin in the woods. It means dialing up April (Aubrey Plaza) and Andy (Chris Pratt), as the former wears randomly-chosen clothes from a garbage bag and the latter accidentally locks himself in a shed. It means seeing how Ann (Rashida Jones) and Chris (Rob Lowe) are doing while she works as a nurse on the frontline and he donates his impossibly healthy blood. And it means checking in on Tom (Aziz Ansari) pretending to be in Bali, Donna (Retta) reporting from her colorful shoe closet, and Jerry (Jim O’Heir) completely failing to understand video chat filters.

Treat Someone Else for a Change: The best thing about “A Parks and Recreation Special” is that it’s far more than a standard nostalgia-for-nostalgia’s-sake reunion. Instead, co-creator/writer Michael Schur brought the Parks and Rec crew together to benefit Feeding America’s COVID-19 Response Fund, in line with the series’ compassionate, community-supporting ethos. The folks behind the show already pledged $500,000 in matching donations, and throughout the episode, blurbs popped up to encourage viewers at home to give what they could.

That feels so true to the spirit of the series. The special doesn’t just depict Leslie as chairing scores of self-created committees to try to help people during the crisis, while Ann treats patients and Chris gives an obscene amount of blood. It translates that idealism into action, using what could have been a shameless effort to cash in on preexisting fondness for the show and instead channeling that attention and support to a worthy cause. The series always strove to show people working together for the common, greater good, and it’s nice to see Schur, Poehler, and the whole team putting their money where their mouth is.

Cameos Banned from Cameo: NBC announced long ago that the special would reunite all of the show’s original cast (save for Paul Schneider, who’s effectively been steam-cleaned from the series’s history), so their digital reunion was no surprise. But Parks and Rec not only impressively lured a host of secondary characters back for guest spots, but made those cameos the comic highlight of the evening.

The conceit for these drop-ins came when Leslie and Ben ran a media blitz via the programs hosted by Joan Calamezzo (Mo Collins) and Perd Hapley (Jay Jackson) to promote positive responses to the pandemic. Joan’s self-involved mania and Perd’s convoluted obliviousness were true to form and hysterical. That setup also gave the show an excuse to run ads from a snake oil-selling Dennis Feinstein (Jason Mantzoukas), a self-care dentistry-shilling Jeremy Jamm (Jon Glaser), and an amusingly lonely Jean Ralphio (Ben Schwartz) who took out an ad for some simple human contact. With an intro from a characteristically clueless Bobby Newport (Paul Rudd), “A Parks and Recreation Special” didn’t forget all the colorful townspeople who made the show so funny in its grand reunion.

Dennis Covid-Feinstein: Despite the timeliness of the episode, and its focus on Leslie and her friends coping with the current crisis, the actual coronavirus humor was both scant and gentle. The Parks and Rec writers were more inclined to graft topical twists onto the show’s usual shtick, with Ron’s prepper mentality leaving him well-prepared, Andy confessing that he’s a 38-year-old man who’s never washed his hands, and Joan performing her own one-woman self-retrospective to an audience of dolls.

Even there, the special is mainly content to trot out familiar gags. Ben combines his pitiful unemployment-fueled claymation dreams with his Cones of Dunshire game. Andy brings back Johnny Karate. Leslie has another effusive description of Ann. Ron has to fend off Tammy 2’s spirited advances. And, of course, nobody wants to talk to Jerry. Much of this feels more like fan service than the uproarious comedy the original show delivered so consistently, but all of these bits are classics (save for the Jerry-hating, which wore out its welcome long before the series finale), so it’s still pleasant to see them all again.

The Verdict: “A Parks and Recreation Special” was not the greatest episode of Parks and Rec there’s ever been. Even taking into account the social-distancing limitations that kept the cast apart (save for real life husband and wife Nick Offerman and Megan Mullally), and the years since the fully-stocked writer’s room wrote an episode together, this isn’t a terribly ambitious reunion. The cast and crew are mainly apt to just play the old favorites and make you smile rather than telling a brand new story with fresh material.

But you’d also have to be made of stone to complain too hard about that right now. There is a sheer joy to seeing those smiling faces on the same screen again, even if it’s in a collection of Gryzzl chat windows. There is something still utterly heartwarming about Ron Swanson pushing past his natural prickliness once more, because he knows it’s what Leslie needs. There is a rousing, even moving spirit at play when the former coworkers and friends of Pawnee join together one last time to sing “5,000 Candles in the Wind”, as a tribute to Li’l Sebastian and all the things that have brought and kept them together.

So much of the world feels out of sorts and in disarray at this moment. So many of us find ourselves reaching for that small bit of comfort, that small bit of normalcy, amid this public health crisis that has disrupted so much. For seven seasons, Parks and Recreation delivered that comfort and optimism, the idea that good people could come together through tough times and, through hard work and mutual support, achieve great things. Groundbreaking or not, we need that warmth and that hope now more than ever and, with a characteristically good cause, “A Parks and Recreation Special” more than delivered.

Where Is It Playing?: The special will be available for streaming via NBC and on YouTube on May 1st.