St. Vincent Will Interview Musicians in Her Shower on New Podcast

She chats with rising artists while holed up in a bathroom 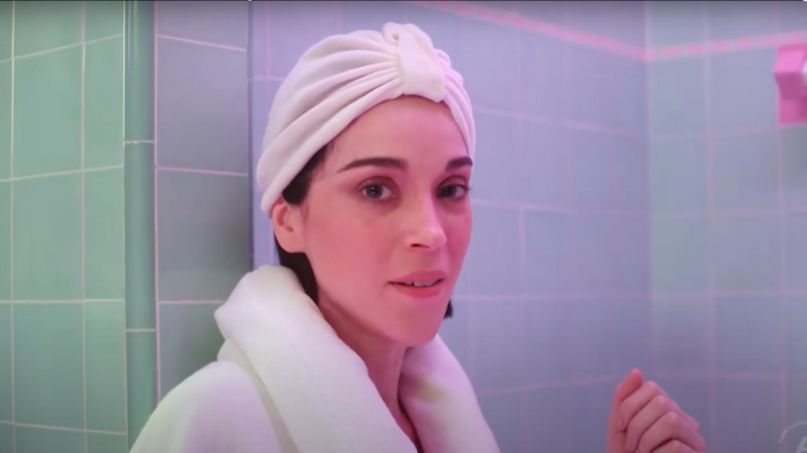 St. Vincent has never shied away from getting weird — apparently not even during a global pandemic. The Grammy-winning alt-pop star has announced a new podcast called Shower Sessions. The series, which was made in partnership with Progressive, is billed as being “half interview, half concert series, 100% in a bathroom.”

Apparently Annie Clark came up with the idea before the coronavirus forced everyone into quarantine. She wanted to find a way to interview rising musicians and hear them perform live in a setting that felt intimate and raw without requiring all the fuss of a proper studio. Thus, the idea to sit down with six different artists in a shower — albeit a glossy, hyper feminine, magazine-ready one — was born, as bathrooms are notoriously known as a low-budget option to replicate vocal booth acoustics.

When she announced the news on Twitter, Clark joked about how normal her podcast idea sounds now that everyone is getting creative at home. “When we filmed Shower Sessions in partnership with Progressive, it was a little less ordinary to film in a bathrobe in the shower,” she said. “Now we’re on par with late-night talk shows.”

In the trailer for Shower Sessions, a bathrobe-clad St. Vincent plays around with perfume bottles and floral bouquets while she waltzes around a bathroom. “What’s the weirdest thing you’ve ever done in the shower? For me, it’s hosting a podcast,” she says. “I’m St. Vincent and this is Shower Sessions.” That’s when we see a series of musical performances, all taking place within an open-tile shower, ranging from stripped-down pop to acoustic-style R&B. Watch it below.

It seems St. Vincent can’t help but make the most of her 2020. She kicked off the new year by filling in for Kurt Cobain at the Nirvana reunion concert, performed in the star-studded Prince tribute show, remixed a Beck track, and debuted her wild meta-documentary The Nowhere Inn at Sundance. She also announced a special vinyl release for Record Store Day, which you can still acquire while quarantined if you play your cards right.