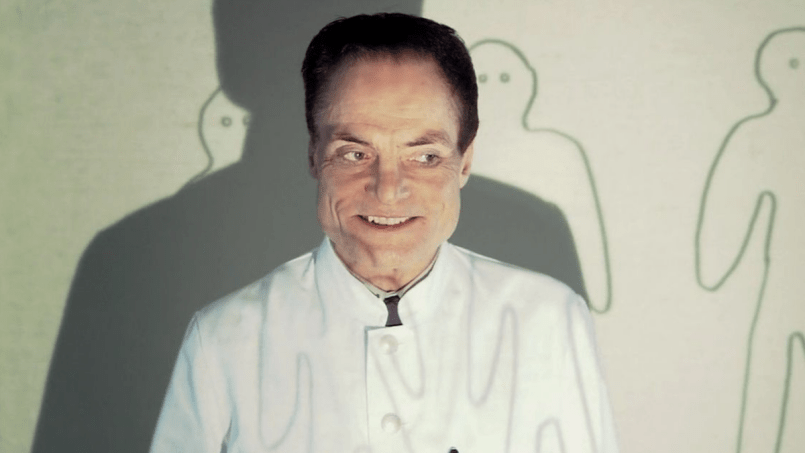 Dieter Laser in The Human Centipede

Actor Dieter Laser, best known for his role in The Human Centipede, has died at the age of 78. A message on his Facebook account posted on Thursday indicates he passed away February 29th, just a few short weeks after his birthday. A cause of death hasn’t been revealed.

Laser was born in Germany in 1942 and enjoyed a steady and prolific career in his home country, appearing in film and TV projects as early as 1968. Credits include a TV adaptation of In the Jungle of Cities, a drama called John Glückstadt (for which he won the German Film Award for Best Actor), and a film adaptation of The Lost Honour of Katharina Blum from 1975.

However, it was 2009’s The Human Centipede (First Sequence) that really put the actor on the map. For writer/director Tom Six’s Dutch body-horror, Laser famously portrayed Josef Heiter, a deranged surgeon who stitched people together, connecting them all anus to mouth. The film, despite its bizarre and gruesome premise, won a series of awards at various horror film festivals; Laser himself took home a trophy for Best Actor at the Austin Fantastic Fest.

Although Laser wasn’t cast in the second film of The Human Centipede trilogy, he did appear in the last one, also known as Final Sequence. In that 2015 movie, he played a Texas prison boss who insisted that all the inmates be sewn together.

Director Six mourned the loss of Laser over on Twitter. “I’m totally shocked Dieter passed away,” he wrote. “He was a force of nature, a unique human being and an iconic actor. I’m so damn proud we created pop culture together. Wished we could have made many more movies. RIP my friend, you will live forever on screen!”

Actress Emma Lock, who starred in The Human Centipede 2 (Full Sequence), also paid her respects to Laser. “To me, Dieter was a far cry from Dr. Heiter,” she said on Facebook. “He was a friend, a colleague, mentor and someone I enjoyed many heart to hearts with. He walked me through my first red carpet and was always there to bolster me behind the scenes when I doubted if I was ready to take on the role of ‘Kim’ in The Human Centipede 2.”

I’m totally shocked Dieter passed away. He was a force of nature, an unique human being and an iconic actor. I’m so damn proud we created pop culture together. Wished we could have made many more movies. RIP my friend, you will live forever on screen! pic.twitter.com/ERGEsY5aZV