The industrial legends call on fans to answer the song's message, "How concerned are you?" 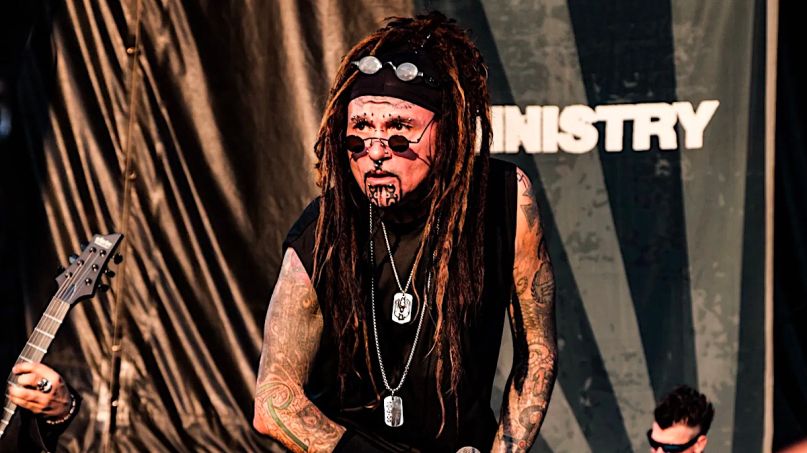 Ministry have unveiled the new song “Alert Level” ahead of their forthcoming 15th studio album. Additionally, the industrial legends are urging fans to upload videos answering the single’s central message, “How concerned are you?”

According to Ministry mastermind Al Jourgensen, the band was planning to finish the new album prior to their summer U.S. tour and release it on Election Day in November. With the world in the midst of a global pandemic, Ministry decided to release the song “Alert Level” now, as they continue to work on the upcoming LP.

“We finished the song in January and it sounded great during rehearsals for our Australia/Japan tour dates, before we went into quarantine,” explained Jourgensen. “The original plan was to finish the new record before the July ‘Industrial Strength’ US tour so we could have an Election Day release, but in lieu of the circumstances — and how relevant the song feels for these bizarre times — we decided to release ‘Alert Level’ now.”

He continued, “Considering that this song features the question ‘How concerned are you?’, I’ll be interested to see how folks answer it themselves.”

A press release added that “Alert Level” has a “timely message as America — and the global population — faces epidemics, environmental crises, political corruption and one of the biggest elections of our lifetime.”

Jourgensen and company are asking fans to upload videos (30 seconds or less) in which they answer the question “How concerned are you?” to social media with the hashtag #MinistryAlertLevel. The band members will watch the clips and share the ones most meaningful to them.

Ministry’s upcoming album will be the follow-up to 2018’s Amerikkkant. In the fall of that year, we caught up with Jourgensen to discuss the political themes of that album and his plans for the forthcoming LP.

As of now, no decision has been made regarding the status of Ministry’s upcoming U.S. tour with KMFDM and Frontline Assembly. The outing is scheduled to kick off July 1st in Seattle.

Check out the lyric video for “Alert Level” below, followed by a new interview with Jourgensen on comedian Bill Burr’s podcast.