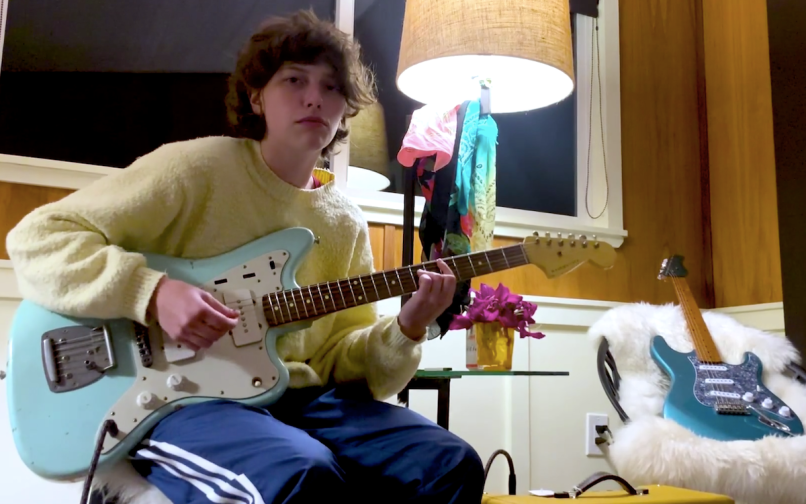 Rising pop songwriter King Princess is riding out the pandemic in a “quarantine shed” in Hawaii. From this place of isolation in paradise, she filmed herself performing songs off her 2019 debut Cheap Queen for a new NPR Tiny Desk (Home) Concert.

The artist born Mikaela Straus normally presents herself with a level of glam that would make David Bowie blush. So it was a surprise to catch her in jogging pants, nursing a “tacky beer can,” and hiding the Budweiser behind a lamp. Whether or not it was her first beverage of the evening, Straus came across as loose and chatty. She said she’d spent her free time “whittling sticks and learning how to drive,” and related her song “Isabel’s Moment” to everyone stuck at home texting their exes in various states of “quarantine thirstiness.”

King Princess toggled between a guitar and an electric keyboard, performing stripped-down versions of some of her most intimate songs. The guitar amp was perhaps a little too loud for the vocals, but KP’s delivery was movingly raw. Between the unvarnished presentation and the talkative interludes, she manages to create a real sense of audience connection even through the technological barrier. One of the most interesting moments came before her last song, “Homegirl”. Straus spoke about how this period of self-isolation had affected her mental health, for good and bad. She said,

“We’re all out of jobs right now. This is the first time I’ve had nothing to do, like, everything’s being pushed to November and that’s a lot of months. I’m back to making music in my room. It’s been really interesting, because we’re all trying to find that creative spark that we had as children, like, “I can just sit in my room for hours and do something!” It’s so lost on us now because all we do is schedule time to do our jobs. Now it’s just actually doing it. I’m struggling, but it’s really fun, too.”

Earlier this year, KP released the Cheap Queen deluxe edition, and shared the fan favorite “Ohio” on streaming services for the first time. Her planned European tour with Harry Styles had to be postponed until 2021, but she still has some fall 2020 dates on the schedule, and tickets are available here.