Rainn Wilson from The Office also stopped by 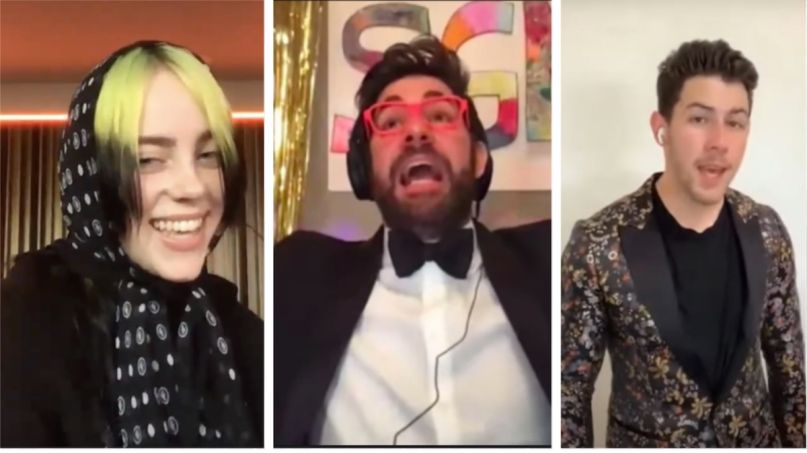 John Krasinski has been passing the time in quarantine by highlighting good news on his new YouTube series. Now, several weeks into the show, he’s generating his own good news by throwing a virtual prom for high schoolers — and he happened to invite some very famous celebrities to attend.

The star of A Quiet Place II wound up recruiting high-profile musicians and famous friends alike to swing by the digital event. Krasinski kicked things off by announcing he would serve as both the host and DJ of prom this year. After spinning a few tunes, he handed over the microphone to the Jonas Brothers and, later, Billie Eilish and Finneas for live performances.

The boy band turned up in their finest apparel — including one rather dazzling, sparkly tuxedo — to sing their Happiness Begins hit “Sucker” with the dance moves to back it up. Meanwhile the Eilish kids opted for a simple yet flashy look, remaining on brand. Unsurprisingly, the two performed the literal song of the year, “Bad Guy”, from When We All Fall Asleep, Where Do We Go?.

Throughout, several familiar faces popped in to dance, including Chance the Rapper and Rainn Wilson, Krasinski’s former co-star on The Office.

“You guys are missing a whole lot of things, and we couldn’t let prom be one of them,” said Krasinski. “It’s the weirdest thing in the world, but you know what? When you thought you were missing prom, and your mom and your dad and your brother and your sister all say, ‘Oh, I remember my prom,’ you now get to say to them, ‘Oh really? Did Billie Eilish play your prom? Did The Jonas Brothers play your prom? Did Chance the Rapper pop into your prom? And did Rainn Wilson ruin your prom?'”

He’s got a point. If your prom included this many celebrities, then you probably went to a fancy private school for celebrity’s kids or you woke up and realized it was a dream. So, fittingly, Krasinski concluded the event with some positive words while he danced to “We Are Family” by Sister Sledge. “Class of 2020, chin up! This is all gonna be over soon,” he said. “And this weird level of joy is contagious. Pick it up, and do something with it!”

Watch wholesome snippets from Krasinski’s prom below. Update: Krasinski included more clips from his prom on the latest episode of Some Good News.

the performances were brilliant but my absolute FAVE part of @somegoodnews prom was @johnkrasinski, @rainnwilson and @chancetherapper just absolutely vibing out together for a solid minute pic.twitter.com/U23xCUrR2h

1000% better than my ‘07 prom even with the LAG @johnkrasinski @billieeilish #SGN pic.twitter.com/SCIo8mAS4T