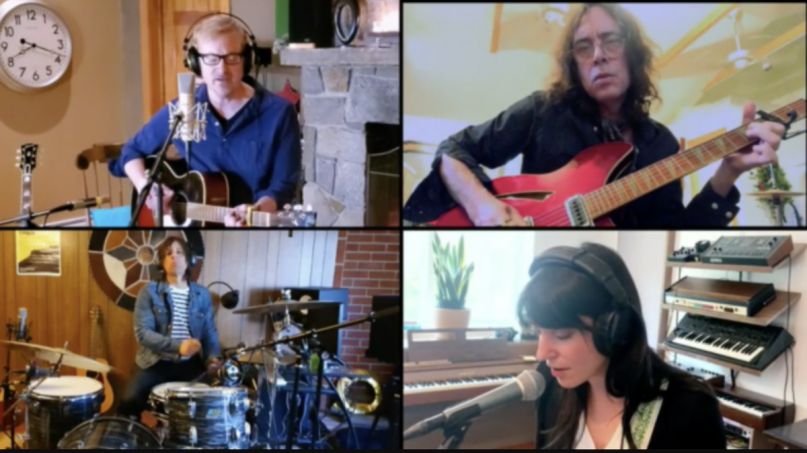 New Jersey natives across the country joined together — digitally — for the Jersey 4 Jersey benefit concert on Wednesday night. Raising money for the New Jersey Pandemic Relief Fund, the event was headlined by Bruce Springsteen and also included the reunion of Fountains of Wayne.

Bruce opened the show, joined by his wife and E Street Band member Patti Scialfa for a performance of “Land of Hope and Dreams”. Frequently performed during the Boss’ live shows and eventually released on 2012’s Wrecking Ball, the song was a fitting opener for the COVID-19 fundraiser with its chorus of, “I said, this train, dreams will not be thwarted/ This train, faith will be rewarded/ This train, hear the steel wheels singin’/ This train, bells of freedom ringin’.”

The rock and roll royalty couple would return again later in the evening to sing Tom Waits’ “Jersey Girl”, a favorite cover of Springsteen’s.

In one of the most touching moments of the night, Fountains of Wayne reunited for their first public performance in seven years to honor their late bandmate, Adam Schlesinger. Schlesinger, who also wrote the title track to That Thing You Do!, passed away earlier this month after contracting coronavirus. With fellow Jerseyite Sharon Van Etten helping out on bass and backing vocals, Fountains of Wayne sang the Welcome Interstate Managers track “Hackensack”. “This for Adam, his parents, his children and New Jersey,” said lead singer Chris Collingwood to intro the song.

The evening’s other performers included SZA and Halsey. Replay all of the performances below.

Goddamn if I didn’t lose it when Fountains of Wayne came on with “Hackensack” just weeks after Adam Schlesinger died. #Jersey4Jersey pic.twitter.com/JUkOXEGf9g