The Parent Trap actor added: "You know, the world has never experienced this, and I don’t think it’s a time to be political" 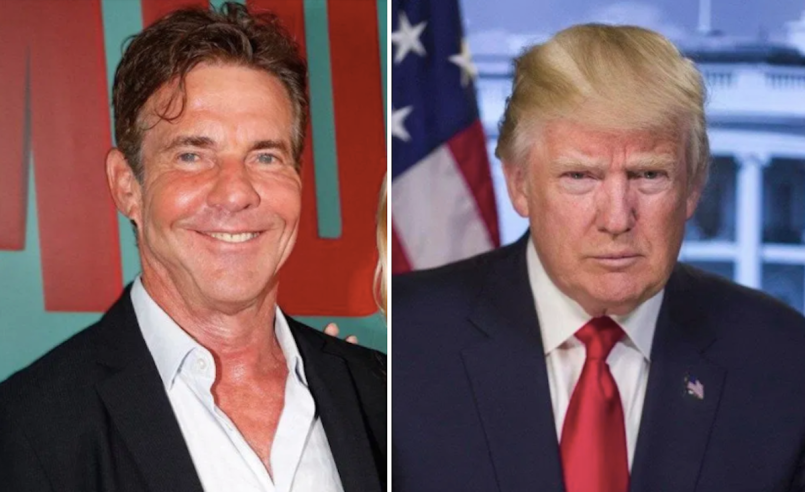 Quaid, who identifies as an independent, emphasized that “I’ve voted both ways throughout my life, swinging like a pendulum toward what the country needed at the time.” For an example of his political thinking, he identified Ronald Reagan as “my favorite president in my lifetime. He was on a par with FDR and Lincoln, too.”

This is an incredible statement and bears analysis. Besides Lincoln (the closest America has come to a consensus GOAT), his two most-admired presidents are FDR, who did more to expand the federal government than any other individual in American history, and Ronald Reagan, who said, “Government is not the solution to our problem, government is the problem.” Perhaps the only thing those three men have in common is that they all said things we would call racist today.

In other words, Quaid isn’t really a policy guy. But as Tolstoy probably wrote, partisans are all alike, while each independent is independent in their own stupid way. Dennis Quaid’s way involves a bit of backpedalling, a dash of changing-the-subject, and heaping servings of positivity.

What he thinks we need right now, more than anything, is for Americans to put partisan bickering aside. He said the pandemic “might be an opportunity for the country to come together again,” and hoped, when all this is over, “we can all be a bit more unified.” He clearly feels strongly about the need for fellowship.

As for where, specifically, he thinks Trump has done a good job, the Parent Trap star praised the president for his early action combating the pandemic. Interviewer Marlow Stern pointed out that the government was getting briefed on the virus back on January 24th, yet the formal cautions and stay-at-home orders didn’t begin until March. “But Trump did do the travel ban to China, and then to Europe very quickly afterward, and he was castigated by a lot of members of Congress, who were just getting out of the impeachment, that it was racist what he was doing,” Quaid countered. “It’s a good thing we had that travel ban at the time.”

Then, perhaps realizing he sounded like a partisan pundit, quickly called for unity: “You know, the world has never experienced this, and I don’t think it’s a time to be political.”

Quaid also praised Trump for efficiently doling out equipment to struggling states like New York. “As far as whether anybody died because they couldn’t get a ventilator in a hospital — I haven’t heard reports about that, have you?”

Stern mentioned some reports of that very thing, as well as the practice of “ventilator-sharing” between multiple patients. Quaid suggested the state should have bought more ventilators two years ago, before praising Governor Andrew Cuomo and President Trump for their handling of a tough situation.

“Well, New York had a chance to buy thousands of ventilators at a very good price like two years ago, but I don’t want to get into the finger-pointing, because Cuomo is doing a great job out there working for the people of his state. And I think Trump, no matter what anybody thinks of him, is doing a good job at trying to get these states — and all of the American people — what they need, and also trying to hold our economy together and be prepared for when this is all over.”

The full interview is well worth a read, with plenty of stories about cocaine in the ’80s, Quaid’s “white-light” experience, and the distance he feels from his struggling brother Randy. The 61-year-old actor also discusses his new podcast, The Dennissance, and his 26-year-old fiancé.