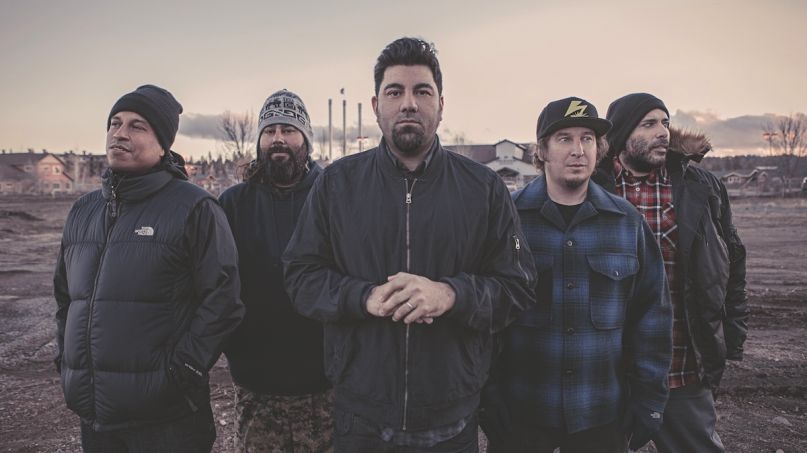 Any new music from Deftones is a welcome treat, even if it’s just a few seconds of a heavy guitar riff. During an Instagram live session, drummer Abe Cunningham offered up the brief audio snippet while chatting with keyboardist/turntablist Frank Delgado.

Cunningham and Delgado jumped on Instagram for a 47-minute video chat session, speaking with each other and answering fan questions in the comments. At one point, Cunningham hit play on a snippet of a new guitar riff, exclaiming, “Oh shit, that’s our new shit!” To which Delgado replied, “There you go, now you got some tunes.” Cunningham then added, “I better stop that before I get in trouble.” He then played it again a few seconds later.

The moment comes at the 23:17 mark of the Instagram video below, but it was also captured by the DeftonesLive YouTube channel and enhanced for clarity. While it doesn’t offer a whole lot in the way of what to expect from the new Deftones album, the riff is decidedly heavy.

Cunningham recently delivered a video message via Twitter, stating that the band is in the final mixing stages of the album, but that the current lockdown is making the process a “bit difficult.” Last year, singer Chino Moreno compared the new material to the band’s classic 2000 album, White Pony. In fact, the new LP is produced by Terry Date, who helmed White Pony and Deftones’ other early albums.

Deftones are slated to headline a North American tour beginning July 27th in Portland, Oregon. As of now, the tour is still on schedule, with tickets available here. In the meantime, the band has started a new Twitch channel, with the members appearing for DJ sessions in recent weeks.