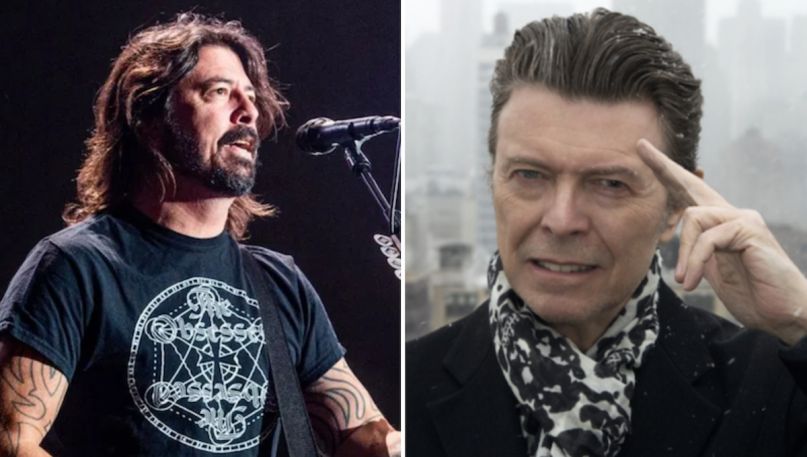 Dave Grohl has spent his time in lockdown spinning yarns about his encounters with other superstar rockers. On his True Short Stories Instagram, the Foo Fighters frontman has shared stories of strip clubs and Pantera and jamming with Prince. In his latest tale, Grohl recounted the time he emailed back and forth with David Bowie.

Setting the stage, Grohl laid out his history with the Thin White Duke, recalling singing “Suffragette City” with his high school band and puking after a party while “Space Oddity” played in his sister’s VW bug. He talked about meeting Let’s Dance drummer Tony Thompson and confessing he’d “stolen more than a few of his drum riffs in my career, to which he replied, ‘Oh, I know…'”

He went on to talk about seeing Bowie perform live for the first time and joining him for his 50th birthday celebration at Madison Square Garden. Grohl himself initially played “7 Years in Tibet” before the rest of Foo Fighters came on for “Hallo Spaceboy”. “I remember glancing over mid performance to see his iconic eyes as the crowd roared,” wrote Grohl. “And they were looking right into mine. Give me chills, still to this day…”

Later, Bowie’s guitarist at the time, Reeves Gabrels, invited Bowie, Grohl, and Pixies’ Frank Black to record a song for his solo album, Ulysses (Della Notte). Grohl watched Bowie sit on the carpet, surrounded by “photographs and postcards,” and “write lyrics, line after line, with no correction… Once finished, he drew a crude, yet beautiful self portrait at the bottom of the page.” After Bowie laid down his vocals, Grohl discovered that lyrics sheet left behind on the music stand. “I snatched that mother fucker up fast than you can say ‘Jean Genie’!” He ended up giving it to his sister, Lisa, who had first introduced him to Bowie’s music.

Grohl’s final interaction with Bowie came over email. He was writing a song for “a big budget, major motion picture,” and asked a mutual connection, Bowie’s long time collaborator Tony Visconti, if he thought Bowie might be interested in singing on it. Visconti gave Bowie the track, and Grohl awaited his response.

It finally came weeks later, and was a very pleasant decline, with Bowie saying the genre wasn’t his taste. “I’m just not made for these times, Browie wrote. Grohl responded with a casual, “…Let me know if you’d ever like to make music together sometime.”

Grohl was shook. He wasn’t sure if he’d somehow pissed one of the greatest rock icons of all time or if he just wasn’t reading the playful tone correctly. “See you in another 17 years!” Grohl quipped back.

“Not if I see you first,” Bowie replied.

“No more birthdays. I’ve run out of them,” Bowie wrote.

The conversation went on with humor and pleasantries, but that line is haunting. Not long after this exchange, Bowie released his final album, Blackstar, and passed away two days later. “I looked back on my memories of him with a great sense of fondness and also deep sadness,” Grohl remembered. “Especially our last exchange. It broke my heart to re-read the line “No more birthdays, I’ve run out of them,” thinking that maybe, just maybe he knew something that we didn’t. And, being the gentleman that he always was, didn’t want us to suffer his pain.”