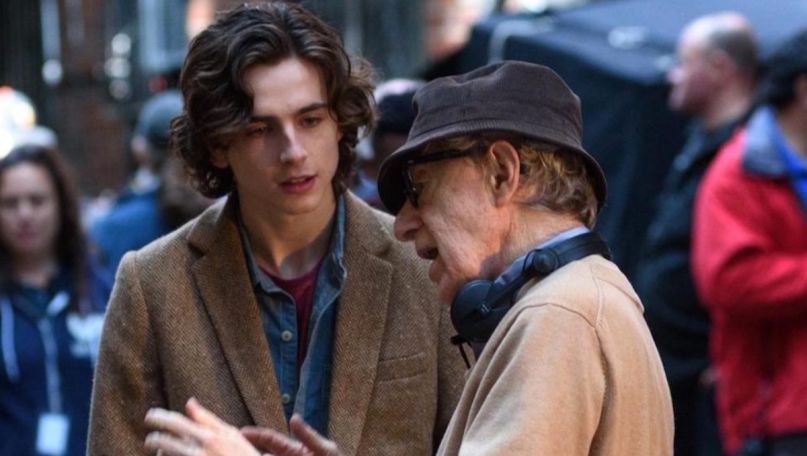 Despite being dropped by its original publisher, Woody Allen’s new autobiography was quietly released this week through small indie Arcade Publishing. In addition to his professional career, Apropos of Nothing takes a close look at the filmmaker’s personal life, including allegations he molested his daughter, Dylan Farrow. It turns out the controversial book also sees Allen essentially call out his own Rainy Day in New York actor Timothée Chalamet for being a sell-out.

In 2018, amidst the height of the #MeToo movement and renewed interest in Dylan’s allegations against Allen, Chalamet publicly said he “regretted” working with the director. He also pledged to donate all of his Rainy Day in New York salary to organizations like Time’s Up, The LGBT Center in New York City, and RAINN (Rape, Abuse, and Incest National Network). According to Allen’s book, Chalamet only did these things in order to boost his chances of winning an Oscar for Call Me by Your Name.

“All the three leads in ‘Rainy Day’ were excellent and a pleasure to work with,” Allen wrote in Apropos. “Timothée afterward publicly stated he regretted working with me and was giving the money to charity, but he swore to my sister he needed to do that as he was up for an Oscar for Call Me by Your Name, and he and his agent felt he had a better chance of winning if he denounced me, so he did.”

Added the 84-year-old director, “Anyhow, I didn’t regret working with him and I’m not giving any of my money back.”

It’s worth noting that Chalamet’s Oscar nomination for Call Me by Your Name was announced more than a week after he pledged to make his donations. Chalamet ultimately lost the Best Actor award to Gary Oldman.

Elsewhere in Apropos, Allen slighted other colleagues who’ve since distanced themselves from him, such as Greta Gerwig, Colin Firth, and Jeff Daniels. “The fact these actors and actresses never looked into the details of the case (they couldn’t have and come to their conclusion with such certainty) did not stop them from speaking out publicly with dogged conviction,” wrote the disgraced director. “Some said it was now their policy to always believe the woman. I would hope most thinking people reject such simple-mindedness.”