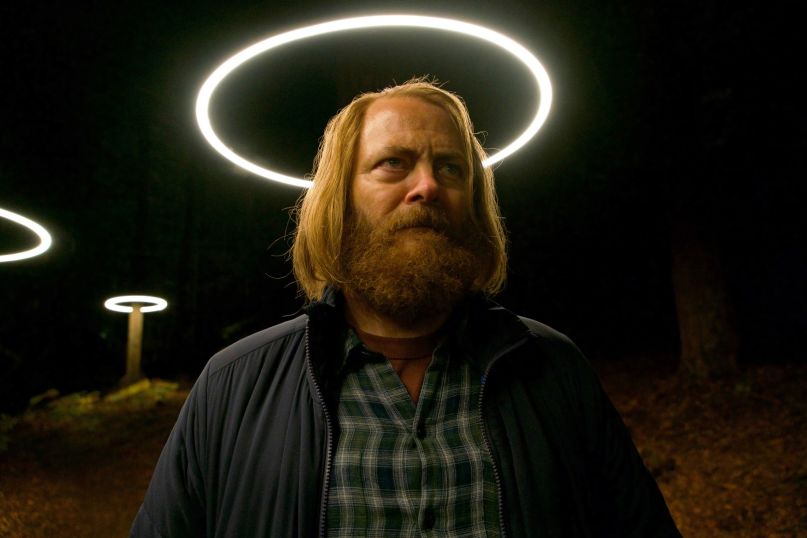 The Pitch: No one knows exactly what Forest (Nick Offerman), the crunchy, enigmatic CEO of ostentatious Silicon Valley tech firm Amaya, is doing within the company’s top-secret research department, colloquially known as DEVS. Workers are sworn to secrecy, even within the company; the brutalist compound, carved out of the California redwoods, is surrounded by a Faraday cage and a hard vacuum seal you can only enter through a single access point. But one day after Amaya programmer Lily Chan’s (Sonoya Mizuno) boyfriend is tapped to join the Devs team, he’s found dead in a mysterious suicide. Haunted by her boyfriend’s disappearance, and obsessed with finding out exactly what they’re doing in there, Lily finds herself on a collision course with corporate spies, Forest’s obsessions, and the nature of free will itself.

Look Out, Mr. Robot: Despite moving the venue from movie theaters to the long-form ambition of prestige TV, Devs is pure, unfiltered Alex Garland through and through. Written and directed completely by Garland, the show feels firmly within Garland’s aesthetic and pet interests: the paranoia of technology’s encroaching omnipotence, the deeply human obsession with the mistakes of the past, and our desire to control the future. Quantum physics and familiar grief collide in twisty, interesting ways it would be impossible to quantify here without giving the whole ride away.

It doesn’t all completely work. For one thing, Garland’s script strains to fill all eight hours of runtime afforded him by FX, the high-concept nature of his ideas occasionally muddled by an intermittently languid pace and Garland’s typical dreamy tone. It’s one thing to fit an exploration of the singularity into a feature film (Ex Machina) — it’s a bigger ask for audiences to sit through a third of a day’s worth of droning, humming artifice and intellectual sci-fi conversations. The fact that DEVS’ true purpose is obscured for much of the series makes it especially hard to find a true access point outside of its stellar visuals (more on that later).

See the Forest for the Trees: But as the show creeps into its fourth or fifth episode, the nature of DEVS and its connection to its deeply wounded cast of characters opens up the show into the kind of Deep-Thought masterworks we’ve come to expect from Garland. The performances are purposefully muted, from Mizuno’s clenched-teeth obsessive to Offerman’s haunted, ambitious Forest; for reasons you’ll understand as the series goes on, the characters move through the world on autopilot. The Devs workers themselves also offer small, but show-stealing conversations on the nature of what they’re creating, from Alison Pill’s resolute Katie to the back and forth between Cailee Spaeny’s young upstart Lyndon and Stephen McKinley Henderson’s veteran programmer Stewart. To an extent, all of these characters are ultimately soundboards for Garland’s ideas more than characters in their own right. But given what DEVS is ultimately revealed to be, that works in Devs‘ favor rather than against it.

And what a world Garland has created for Devs. Garland brings his usual suspects (director of photography Rob Hardy, production designer Mark Digby, visual effects supervisor Andrew Whitehurst, composers Geoff Barrow and Ben Salisbury) to the table, and the world hums with Garland’s unique sense of futuristic foreboding. The Amaya campus is a masterwork of cultish, church-like architecture, the trees overshadowed by an eerie, gargantuan status of a curly-haired young girl (Forest’s late daughter, for whom the company is named), her eyes open and arms lifted in an expression of curiosity and fear. The Devs labs are set along a path of redwood trees whose trunks are surrounded by halo-like lights, which makes for a hauntingly divine image once they’re illuminated at night. The lab itself, a gold-mesh cathedral floating in a vacuum seal, is the show’s true visual highlight, a moody womb where some of the greatest secrets of the universe are being incubated.

A Nigh Elation: But what is Devs, you might be asking at this point? It’s a question that weighs on the characters as much as the audience, especially the characters who are working on the bloody thing. While Lily’s amateur detective work to solve her boyfriends’ disappearance is only intermittently fascinating in the first half (aided little by Jin Ha’s wistful ex/unwitting accomplice Jamie), it’s the work inside the DEVS labs, and Lily’s eventual entanglement in it, that really grips you.

Whatever DEVS is up to, it butts up against prescient issues of the omni-powerful nature of modern tech companies, alongside questions of determinism and free will. “The universe is deterministic,” Forest tells Sergei in the first episode, with the kind of hardened certainty that can only come from someone convinced that the past and the future run along a straight, immovable line. But is it really? Are we capable of ever making a true decision of our own free will? Or are we victims of quantum circumstance? It’s these questions that fuel Devs‘ most fascinating subjects, even if it takes a while to get there.

The Verdict: Whether Devs feels like a revelatory piece of intellectual science fiction or another droning, navel-gazing prestige drama is in the eye of the beholder. But for those who can get past the slow pace, some dodgy Russian accents (sorry, Brian d’Arcy James, but you know it’s true) and the occasional forays into House of Cards-level psychodrama, Garland’s latest feels like the kind of thought-provoking science fiction that no longer has a home at the cineplex. After the disappointing dump of Annihilation on Netflix in many territories, and its sobering box office performance in the States, it must be tempting for Garland to retreat from the big screen for the expansive playground of streaming. Here’s hoping TV’s open world gives Garland the audience he deserves.

Where’s It Playing? Devs messes with your head and plays with your destiny on the newly-launched FX on Hulu March 5th.