Tommy Lee Reacts to President Trump “Molesting” US Flag: “What the F–k Is Wrong With You, Dude?” 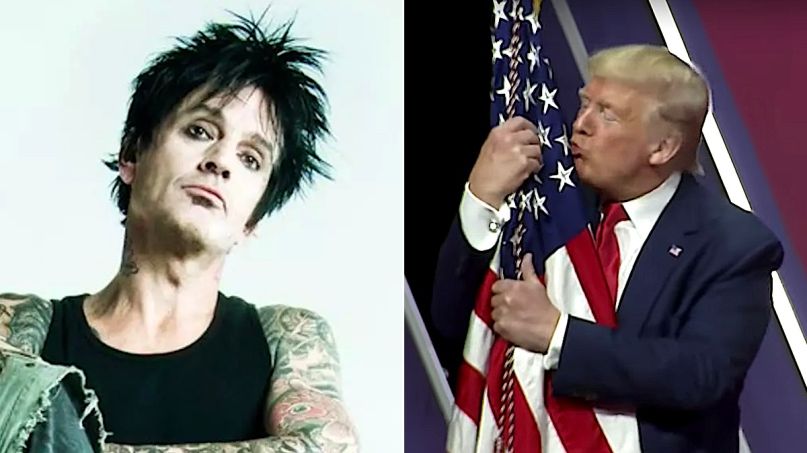 Donald Trump once again got handsy with an American flag during his recent appearance at the 2020 Conservative Political Action Conference. The bizarre encounter led Mötley Crüe drummer Tommy Lee to wonder “what the f—k is wrong” with the president.

As he’s been known to do, Trump slowly walked up to a U.S. flag as he was introduced to the CPAC attendees, gently caressing Old Glory and whispering sweet nothings into its nonexistent ears. Trump mouthed “I love you” over and over again as he gave the flag a lengthy hug and kiss. All this while The Rolling Stones’ “You Can’t Always Get What You Want” provided an oddly romantic soundtrack.

Of course, the president’s antics didn’t go unnoticed by late-night host Jimmy Kimmel, who introduced the clip during his monologue as a moment that saw Trump “once again sexually molest the American flag.”

Tommy Lee shared the Kimmel footage on Instagram, and can be heard in the background saying, “What the f–k is wrong with you, dude?” It’s not the first time Lee has wondered as much, as the drummer has ripped Trump in previous social media posts, as well.

Back in August, Lee imagined an America post-Trump, writing, “You Trumpsters better pray that liberals never gain control of the WH again because we are going to pay you back so f–king hard for all of this shit.”

He added, “Planned Parenthoods on every damn corner. We’re going to repaint Air Force One pussy hat pink and fly it over your beloved Bible Belt 6 days a week, tossing birth control pills, condoms & atheist literature from the cockpit.”

When he’s not asking “what the f–k is wrong” with President Trump, Tommy Lee is prepping for Mötley Crüe’s comeback tour with Def Leppard. The summer stadium outing, which also features Poison and Joan Jett, kicks off June 21st in San Antonio, Texas. Pick up tickets here.