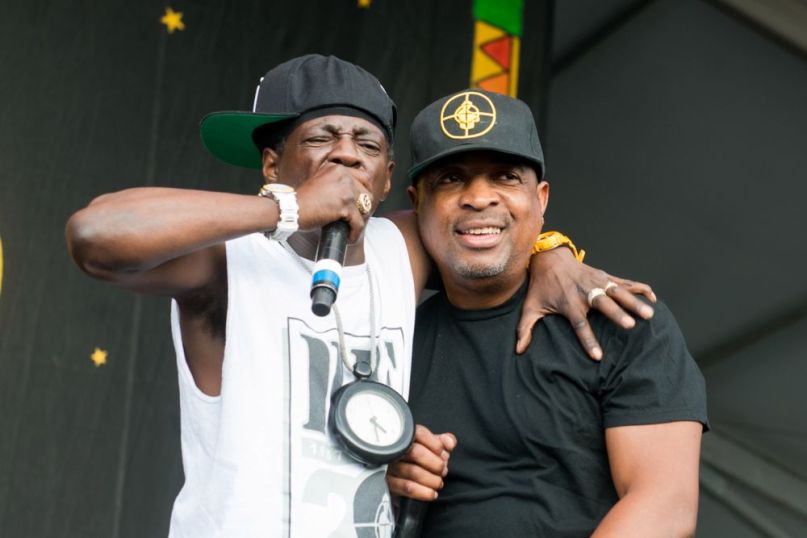 “Public Enemy and Public Enemy Radio will be moving forward without Flavor Flav. We thank him for his years of service and wish him well,” the group said in a statement on Sunday night.

Flavor Flav also made clear that he “has not endorsed any political candidate in this election cycle and any suggestion to the contrary is plainly untrue.”

In response, Chuck D said Flavor Flav “chooses to dance for his money” and warned him that “He has a year to get his act together and get himself straight or he’s out.” Chuck D’s lawyer further added: “From a legal standpoint, Chuck could perform as Public Enemy if he ever wanted to; he is the sole owner of the Public Enemy trademark. He originally drew the logo himself in the mid-’80s, is also the creative visionary and the group’s primary songwriter, having written Flavor’s most memorable lines.”

In a series of tweets earlier Sunday, Chuck D accused Flavor Flav of being politically ignorant.  “He don’t know the difference between Barry Sanders or Bernie Sanders he don’t know either,” he wrote. Chuck D also said the “last straw” was when Flavor Flav failed to support Harry Belafonte’s criminal justice organization Sankofa after Belafonte inducted Public Enemy into the Rock and Roll Hall of Fame.

After meeting at Long Island’s Adelphi University, Chuck D and Flavor Flav formed Public Enemy in 1985. The duo’s debut single, “Public Enemy #1”, caught the attention of legendary producer Rick Rubin, who at the time was an executive at Def Jam Records. Rubin initially sought to sign Chuck D as a solo artist as he did not understand Flavor Flav’s role as the group’s hype man. However, Chuck D insisted that Flav be part of his record deal with Def Jam. Public Enemy later rounded out their initial lineup with Professor Griff and Terminator X.

Public Enemy quickly cemented their place in hip-hop’s lexicon with their 1988 album, It Takes a Nation of Millions to Hold Us Back, and their 1989 single “Fight the Power”, which famously soundtracked Spike Lee’s Do the Right Thing.

Flavor Flav’s involvement in Public Enemy fluctuated over the years, as he pursued other opportunities in reality television. He also struggled with substance abuse and legal issues.

Beyond disagreements over politics, in recent years Chuck D and Flavor Flav butted heads over royalty payments. In 2017, Flavor Flav sued Chuck D over claims his earnings from Public Enemy “diminished to almost nothing.”