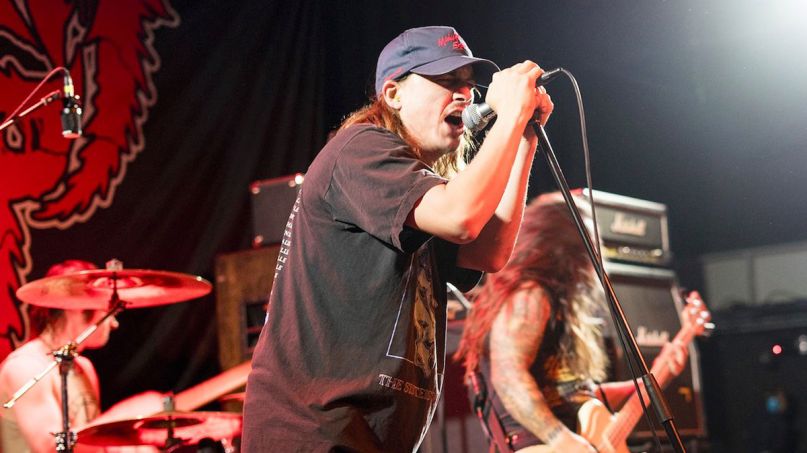 Texas thrashers Power Trip are in the studio recording the follow-up to their acclaimed 2017 album, Nightmare Logic.

The band posted an image on Twitter of a studio room, insinuating they are tracking new music. Drummer Chris Ulsh can be seen, as well as a Jackson guitar and Marshall guitar amps. Producer and engineer Arthur Rizk is once again behind the board after previously recording Nightmare Logic.

It’s the most substantial update the band’s given on their progress with the new album — one of Heavy Consequence’s most anticipated metal releases of 2020.

The last thing we heard from Power Trip was their excellent cover of Outburst’s “When Things Go Wrong” late last year. This followed the 2018 single, “Hornet’s Nest”, with the band spending most of the past two years touring in support of Nightmare Logic.

With that album cycle complete, it appears Power Trip are finally working on their third LP. Previous releases were issued by Southern Lord; however, reported disputes over their record deal might force Power Trip to seek a new label home.

Having signed a three-album deal in 2012 as a relatively unknown Texas band, Power Trip’s status has skyrocketed since then. As reported by Lambgoat, Power Trip are apparently trying to exit the agreement after Southern Lord “falsely” claimed copyright for “Hornet’s Nest” — released via California indie label Dark Operative.

Dark Operative then made a series of pointed tweets regarding the dispute targeted at Southern Lord and its founder Greg Anderson, also of Sunn O))). Southern Lord did not promote Power Trip’s recent co-headlining tour with High on Fire, with Dark Operative lashing out at Anderson and Southern Lord:

“We’re 23 shows into the Power Trip / High on Fire North American tour. Do you plan on mentioning this tour even once on social media, @TwatterLord ? It’s coming to your city Saturday, btw. Come say hi.”

Southern Lord then blocked Dark Operative on Twitter, with the latter calling Anderson a “thieving, dumpy piece of robed feces.”