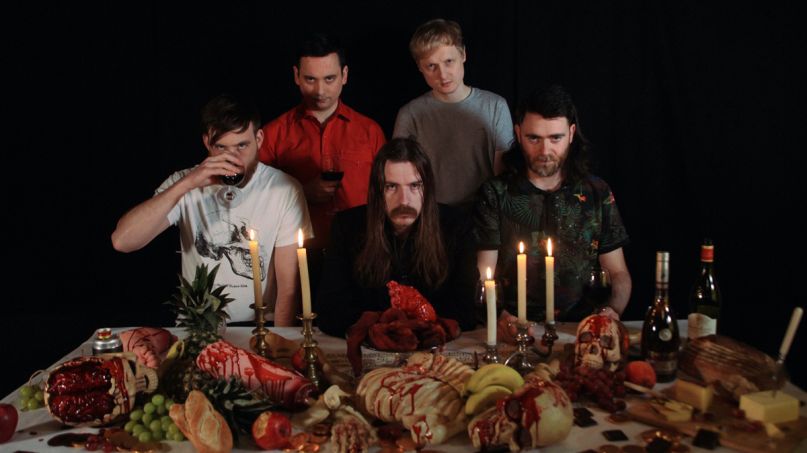 “Rubbernecker” picks up the pace compared to the lead single, “Reducer”. Here, the band adds some swing to their heavy metal repertoire, recalling Jane’s Addiction and the proto-metal dabblings and dark sarcasm of early Blue Öyster Cult.

“The lyrics of ‘Rubbernecker’ explore feelings of desperation and eroding senses of community in a world that’s seemingly gone completely mad,” singer Matt Baty said. “The central character is the clown, who attempts to detach himself from the world he observes as chaotic and unruly. The more he isolates himself, the more he yearns for kinship but the ever growing forces that reinforce his terror of the outside keep him rooted in his confinement. It’s a sad song really.”

“The video is about the band being trapped in limbo and forced to perform in a circus for the dead kids that reside there,” Bonilla Jr. said. “They are watched over by a clown that kills them off one by one, kind of like a slasher film, which entertains the kids more than the circus acts. A lot of the imagery in the video is inspired by the painting ‘The Harrowing of Hell’ by Hieronymus Bosch.”

Pigsx7 — as they are conveniently abbreviated — were set to play a few select shows in the States in the coming days, including one at South by Southwest, but those gigs were called off when SXSW was canceled. They will still kick off a UK and Europe tour in April.