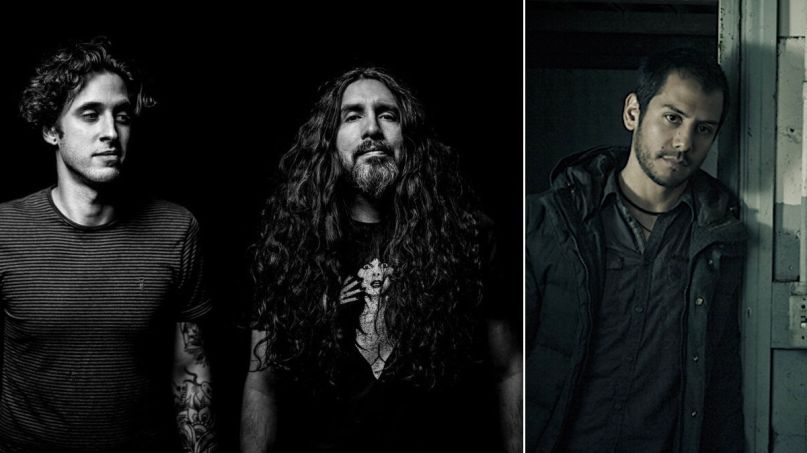 In advance of their debut EP, Maiden Voyage, Moon Destroys are premiering the second single, “Stormbringer” — which features Cynic’s Paul Masvidal — exclusively via Heavy Consequence. The song is accompanied by an NSFW video.

Moon Destroys is built around the core duo of guitarist Juan Montoya (ex-Torche) and drummer Evan Diprima (ex-Royal Thunder), with songs featuring guest vocalists from across the heavy metal scene. For “Stormbringer”, the band tabbed progressive metal luminary and Cynic mastermind Paul Masvidal, who contributes his melodic tenor and oblique lyrics to the massive song.

“Albert Camus said, ‘There is no love of life without despair of life,'” Masvidal states of the song. “‘Stormbringer’ sounds like a huge tsunami of power and energy … one of those giant waves that pass through our lives and annihilate everything, including the things we know. Leaving nothing in its wake. It’s then that we find the indestructible within ourselves.”

Conscious that they’re releasing music during a turbulent time, Montoya and Diprima said that they hoped “Stormbringer” could act as a sonic escape and a healthy distraction for listeners.

“Now is the time to connect with people, through music, through love,” Montoya says. “‘Stormbringer’ is from my soul. We will weather the storm together.”

Adds Diprima: “Let these rhythms help you escape for a while… The storm always ends, bringing a new, stronger outlook on life.”

In addition to Masvidal’s guest vocals, “Stormbringer” features synthesizers by The Sword’s Bryan Richie, who compares the song to a “towering cumulus taking shape to dissipate a deluge of sonic serenity.”

Maiden Voyage is out March 27th via Brutal Panda Records, with pre-orders available at Moon Destroys’ Bandcamp page and here.

Watch the NSFW video (contains nudity) for “Stormbringer” below.