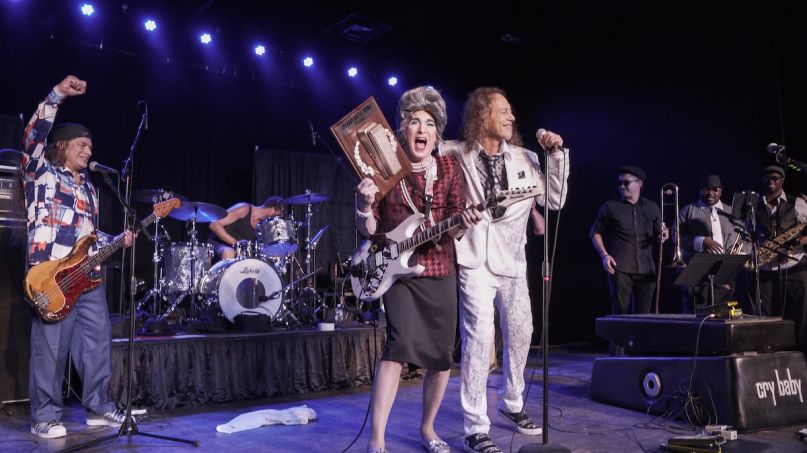 Kirk Hammett and Mrs Smith at "Wah Off", photo by Ross Halfin

The Cry Baby pedal is a staple in rock music for its wah-wah effect, a favorite of legendary guitarists like Jimi Hendrix and Metallica’s Kirk Hammett. Over the weekend, Hammett faced off in a wah-wah competition with Mrs. Smith — actor David Hansbury’s shredder alter-ego — where the latter soundly defeated the metal guitarist.

The “Cry Baby Battle Royale” was held at the Senate in Columbia, South Carolina on Sunday night. The night also included a performance from Hammett’s cover project, The Wedding Band, which features Metallica bassist Robert Trujillo.

The seven-minute “wah-off” was appropriately soundtracked by Isaac Hayes’ Oscar-winning “Theme from Shaft” — notable for its iconic use of the Cry Baby pedal by late guitarist Charles “Skip” Pitts.

Hammett gave a strong effort, even standing atop a Cry Baby pedestal. But Mrs. Smith’s wah-wah prowess was just too much.

“[I’ve] just been out-wah’d,” Hammett said. “A moment in history has just occurred.”

“I learned it all from watching you,” she joked to Hammett afterward.

The challenge initially came about during an interview on The Mark Agnesi Show when Mrs. Smith called out Hammett, a notorious Cry Baby aficionado. Many of the Metallica guitarist’s solos are steeped in the wah effect, which is a definitive trait of his signature sound.

“I’m the number-one wah-wah abuser,” Mrs. Smith said. “I abuse the wah more than Kirk Hammett and I’ve challenged him multiple times to a wah-off. Why are you hiding behind your wah-wah pedal, Kirk Hammett?”

As for Hammett and Metallica, the thrash legends are set to play a South American tour and a string of headlining slots at U.S. music festivals in the coming months. However, a couple of their festival gigs had to be canceled due to James Hetfield’s ongoing rehab schedule. Pick up tickets to Metallica’s upcoming show here.