Inspired By: Tears for Fears Playlist Airing on Consequence of Sound Radio

To celebrate the 35th anniversary of Songs From the Big Chair 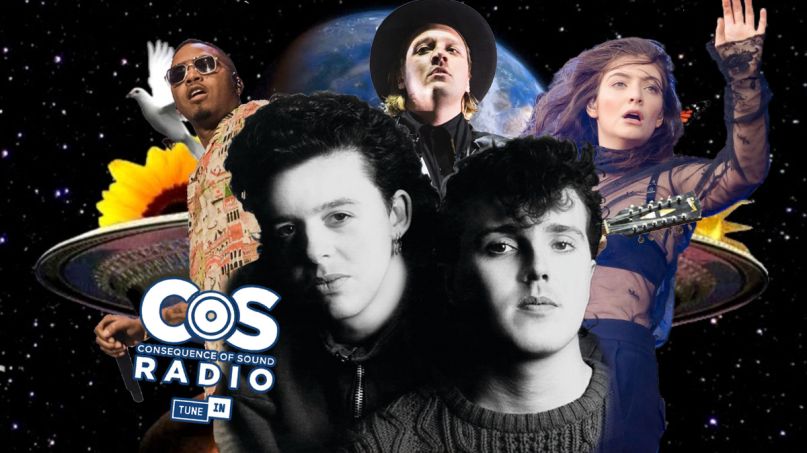 This Friday sees the release of the 35th anniversary reissue of Tears for Fears’ new wave classic Songs From the Big Chair. With enduring hits like “Shout”, “Head Over Heels”, and of course “Everybody Wants to Rule the World”, the album is not only one of the best LPs produced by the ’80s, but one of the most influential. Today on Consequence of Sound Radio on TuneIn, we’re celebrating that legacy with a brand new Inspired By playlist.

In a new twist on Inspired By, we won’t just be playing music that was influenced by Roland Orzabal and Curt Smith’s work — though there will be plenty of that as well. Instead, the first block is loaded with Tears for Fears covers by the likes of Weezer (see: The Teal Album), Disturbed, and of course Gary Jules. Then we’ll look at artist like The Avalanches, Kanye West, and Nas, all of whom have sampled or interpolated Tears for Fears’ music. Finally, we’ll get to acts whose sounds were clearly inspired by the band, like Lorde, Arcade Fire, and The 1975. There’s even a special treat at the end that brings the circle of influence all the way around.

To hear it all, tune into CoS Radio today, Tuesday, March 10th at 6:00 p.m. ET / 3:00 p.m. PT, or catch one of the replays later in the week. The complete broadcast schedule is below, and you can also peep the entire Consequence of Sound Radio weekly programming guide to see everything coming to TuneIn this week.

Listen to Consequence of Sound Radio anytime via TuneIn or on the TuneIn app, available at the Apple App or Google Play stores. You can also simply ask your smart device to “play Consequence of Sound Radio.” Or, just stream directly from the CoS website by clicking the radio symbol on the right side of the header at the top of every page, or by using the player embedded above.