Streaming services are loaded with miniseries guaranteed to shock, surprise, and scare 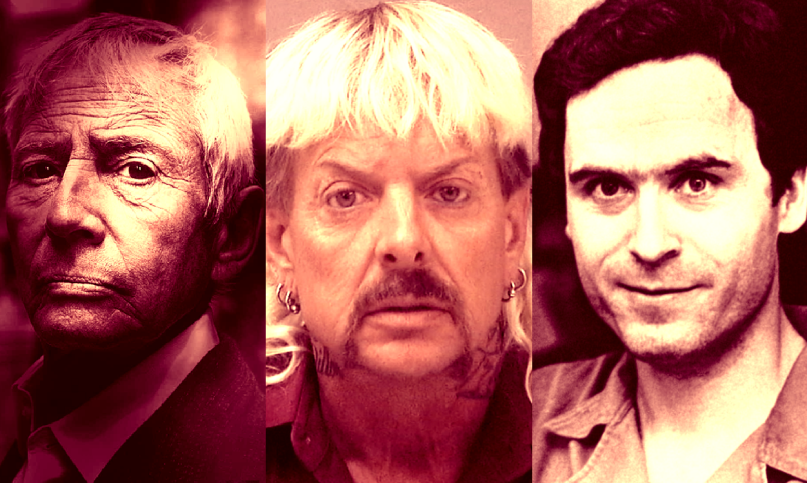 The Jinx, Tiger King, Ted Bundy Tapes
view all
Next

If, like me and the rest of the world, you’re holed up in self-quarantine with nothing but your wits, some cans of food, and a rapidly dwindling supply of toilet paper, you’ve been digging deep into the world of Netflix’s true crime miniseries Tiger King: Murder, Mayhem and Madness. With its Coen-esque bizarro world of big cats and even bigger personalities, it’s proven to be the balm we need in these crazy corona-tainted times. After all, if the world is going to get this crazy, we need something even crazier to shock and enthrall us: what better way to do that than to follow the exploits of narcissistic (alleged) murderer-for-hirer Joe Exotic and the myriad tiger-based sex cults in his orbit?

But, of course, true crime’s been an obsession for humankind long before the days of In Cold Blood and Serial; we’re voyeurs at heart, highly attuned to the sensational and outlandish. Streaming services are rife with multi-part miniseries about murder, mayhem, and madness, sordid tales of serial killers and corporate con men (and women) who engage in acts we couldn’t possibly imagine. For those who’ve just finished Tiger King and are jonesing for more moody true-crime miniseries, we’ve got you covered. We can’t promise any elaborate country music videos in these, but they should enthrall and horrify all the same.

Facts of the Case: Arguably the catalyst for the true-crime documentary series on Netflix, this 2015 scorcher by Laura Ricciardi and Moira Demos charts the long, complicated story of Steven Avery, a man accused of murder after already having spent two decades behind bars for a murder he didn’t commit. The series helped carve out so many of the stylistic hallmarks of true crime stories, from its ponderous drone shots of sleepy communities to its elegantly structured series of reveals that kept you moving from episode to episode. While the story of Steven Avery continues (and a less-effective 2018 follow-up spent more time on the impact of the show on the case than the case itself), it’s still Ground Zero for the modern age of true crime we’re now in — and Netflix’s position atop that pile.

The Jinx: The Life and Deaths of Robert Durst

Facts of the Case: While Making a Murderer was making waves on Netflix, another miniseries on HBO also shocked the nation — The Jinx follows eccentric real-estate heir millionaire Robert Durst, who’s attracted the attention of law enforcement officials in three different states for murdering several women over numerous decades. But as elegantly as Andrew Jarecki’s six-part documentary series lays out the facts of Durst’s case, it’s the final hour (and its final minutes) that really sealed the deal: a burp-laden confession over a hot mic in a bathroom, when Durst thinks he’s alone. It’s one of the most jaw-dropping moments of documentary filmmaking-as-investigative-journalism to date.

Facts of the Case: If your biggest takeaway from Tiger King was the sex-cult stuff more than the murder-for-hire stuff, you might want to revisit Netflix’s 2018 documentary series Wild Wild Country. Maclain and Chapman Way’s six-part series told the suitably-wild story of the Rajneeshpuram community, who set up shop right outside the sleepy town of Antelope, Oregon, and set off a tiny war between the deeply strange Rajnesshi cultists and the townsfolk of Antelope. More than just a sordid tale of drugs, cults, and government investigations, it’s a tale of cultural conflict and the surreal ecosystem of cult environments, with programming that can linger on long after your leader’s been exposed as a fraud.

Facts of the Case: What’s unique about The Staircase is that it didn’t start out life on Netflix: the first several parts of this series are a 2004 French documentary that arguably laid the seeds for what we see now in this modern era of true crime. Michael Peterson, who went to prison for murdering his wife, Kathleen (found at the foot of their staircase, where he argues she simply fell), is a fascinating, complicated figure around which to base a show around, and its comprehensive look at his story is so all-encompassing that 15 years later, Netflix released it with three additional episodes detailing how the case was progressing. And even so, like the best true crime, you’ll still be left wondering what really happened that night.

The Trials of Gabriel Fernandez

Facts of the Case: The abuse of a child is one of mankind’s most unthinkable crimes, so the opening minutes of The Trials of Gabriel Fernandez — detailing the murder of an eight-year-old boy, his body covered in cuts and burns and bruises — are particularly shocking even for someone desensitized to true crime. And it only gets more harrowing and unflinching from there: Brian Knappenberger’s documentary is exhaustive in its exploration of the ways innocence can be decimated by uncaring, monstrous parental figures. Moreso, it charts the ways the system is unable (or unwilling) to help kids like Gabriel who are facing this kind of horrible abuse. It’s not for the faint of heart, but in that intensity lies its incredible power.

Killer Inside: The Mind of Aaron Hernandez

Facts of the Case: Former New England Patriot Aaron Hernandez’s 2013 murder of Odin Lloyd (and the subsequent realization that he may have killed two people before that) drives Geno McDermott’s three-episode series, one which that explores the pressures of fame and the impact (both literal and figurative) his football career may have played in the killings. Probing deep into Hernandez’s motivations, McDermott opens up possibilities ranging from familial grief to concussive brain trauma to closeted queerness. We’ll never truly know what was in Hernandez’s head that night, but Killer Inside at least uses that as a platform to break down the corrosive nature of modern celebrity, sports, and toxic masculinity.

Facts of the Case: If you’re looking for more tales of animal abuse after Tiger King (but honestly, why would you, you monster?), you might want to check out this somewhat slept-on miniseries that finally puts you, the true-crime-obsessed Internet sleuth, in the role of the hero. After posting a video of himself killing two kittens in graphic detail, Luka Magnotta suddenly found himself the subject of focus for a group of Internet detectives, who continually tried to bring him to justice even as his crimes escalated (including the 2012 murder of college student Jun Lin). The details are wild and the crimes are grisly, but Don’t F**k With Cats also brings up the extent to which true-crime obsession might result in a feedback loop that self-professed online killers thrive on. In trying to solve murders, do we end up pushing them to do more?

Facts of the Case: Years after Ruben Fleischer turned the story into a tone-deaf comedy starring Jesse Eisenberg and Aziz Ansari (30 Minutes or Less), Evil Genius explores the maddening mysteries that surrounded the tale of Brian Wells, who in 2003 robbed a bank in Erie, Pennsylvania, only to be killed by a bomb that was attached to his neck. And somehow, that’s only the beginning of the story, as Trey Borzillieri’s cinematic investigation leads him into a web of co-conspirators, lies, and deceit that remains intriguingly nebulous.

The Case Against Adnan Syed

Facts of the Case: Serial cracked the true-crime podcast world wide open, but 2019’s The Case Against Adnan Syed offers a much-needed counterpoint to the Sarah Koenig investigation into the 1999 disappearance and murder of 18-year-old Hae Min Lee by ex-boyfriend Adnan Syed. Telling the story from Lee’s perspective is an intriguing way to add new wrinkles to the Syed case. But it also raises interesting questions about how true crime stories are framed and where our sympathies are engineered to lie. Serial raises interesting questions about Syed’s potential innocence, but The Case Against Adnan Syed reminds us that there are very strong arguments in the ‘pro’ column, too.

Facts of the Case: Errol Morris is the master of true-crime documentaries (The Thin Blue Line practically wrote the stylistic rule book), so it’s pleasing to see him do a deep dive on Netflix that blurs the line between true-crime doc and reenactment. With a Peter-Sarsgaard led dramatization in his back pocket, Morris details Frank Olson’s death in 1953 and its possible connections to a government conspiracy called MKUltra, as filtered through his son’s investigation of his father’s death. The two halves of the story — Frank’s life and death, and his son’s detective work — meld seamlessly into a gripping mix of reality and fiction, befitting one of the genre’s greatest talents.

Click ahead for more true crime options for your survival queue…